Coalition government is in fact the default state for Slovakia. The problem for Mr Fico, and indeed everyone else, is that this time the numbers barely add up: the simple arithmetic of 2006 has become the advanced calculus of 2016. 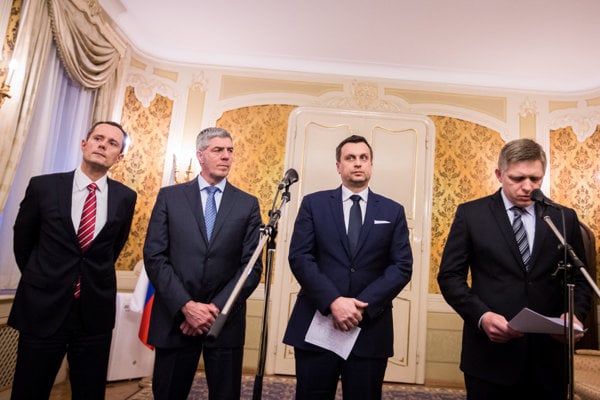 FOR those of you who were not paying attention on March 5, here is your cut-out-and-keep guide to the finest electoral train wreck of recent memory. The following survivors are still picking up the pieces...

Smer (49 seats). The party of ‘certainties’, whose four years in sole charge of the country revealed its iron discipline and intellectual vacuity, lost a third of its support, but remains the largest party. After warning of a zlepenec (‘hodge-podge’) government, that is precisely what it will lead. Despite its ugly appeals to chauvinism and the imminent supposed dangers of migration, barely a peep on that subject has been heard since the ballots closed.

SaS (21) and OĽaNO-NOVA (19). Now in theory, these ’parties’ are separate. But since the former spawned the latter, we shall group them together. Each has a prima donna-ish leader (OĽaNO-NOVA has two!), multiple internal factions, and a record of trouble-making and ill-discipline which would make any coalition involving either (or, heaven forbid, both) of them very tricky to hold together. SaS leader Richard Sulík’s quixotic decision to vote down his own government in 2011 set the scene for Smer’s victory in 2012, and still rankles with many on the right.

#Sieť (10). Talking of prima donnas, even the unshakeable self-confidence of leader Radoslav Procházka took a visible battering on election night after the 92(!) journalists accredited to the party’s HQ began to realise that there would be no victory speech, or even an appearance from the leader. After barely scraping into parliament, this collection of rebranded Christian Democrats will, ironically, need every bit of Mr Procházka’s messiah-complex to achieve relevance.

Slovak National Party (15). Responsible for a series of outrageous scandals in ministries that it controlled in the 1990s and again in 2006-10. A long record of repellent anti-Roma and anti-Hungarian slurs? Check. But never fear, it has now been anointed a ‘normal’ party by Smer leader Robert Fico. It would have to try quite hard to stay out of government, but unfortunately won’t.

Most-Híd (11). Béla Bugár’s Hungarian-Slovak party is still mostly Hungarian, but could not, even at the third attempt, hoover up the 4+ percent of votes that went again to its nemesis, the Hungarian Community Party (SMK), which remains outside parliament. As the ethnic-Hungarian vote is the most reliable thing in Slovak politics, this is a major problem for Most-Híd. Can it survive the electoral poison of working with Smer, let alone the SNS?

Kotleba – People’s Party Our Slovakia (14). Honestly, words fail me. Except to note that it is telling how many of Mr Kotleba’s supporters were unwilling to admit their intentions before the election.

Note to Robert We’ll protect you’ Fico: if you’re the kind of voter that thinks we should really start building walls and camps, then who you gonna call? The ‘social democrats’? I don’t think so.

We Are Family – Boris Kollár (11). Now, voting for not-very-neo-Nazis might make sense to people who go for men in uniform. But who exactly does Boris appeal to? Scarf-wearers? There must be a lot of them (172,860, to be precise). Since the election, the tabloids have been full of photos of the oligarch carousing with a notorious Bratislava mafioso (currently incarcerated). A former squeeze, now an MP, has been dubbed ’the black widow’: Boris is almost unique among her lovers in not having been murdered or imprisoned. There is almost certainly more of this to come.

Among the casualties were the Christian Democratic Movement (KDH), which had been in parliament since 1990 but fell just 1,600 votes short of winning seats. It must be cursing Mr Sulík: it would have retained the health ministry were it not for his antics in 2011, and might perhaps have kept more of its elderly supporters alive long enough to vote in this election.

The demise of the Slovak Democratic and Christian Union (SDKÚ), once the intellectual powerhouse of Slovak politics, was pitiful. When the first official results were released on election night, with just over 10 percent of precincts reporting, the party had recorded a grand total of 3 votes in the whole of Nitra Region (population: approx. 700,000), until recently one of its power-bases.

In June 2006, a headline in The Slovak Spectator, following that year’s election, announced: ‘No easy equations in coalition math.’

As it turned out, Robert Fico quickly cut a deal with a populist former prime minister and the nationalists, weathered a flurry of criticism from social democrats elsewhere in Europe, and entered government for the first time.

Coalition government is in fact the default state for Slovakia. The problem for Mr Fico, and indeed everyone else, is that this time the numbers barely add up: the simple arithmetic of 2006 has become the advanced calculus of 2016. The compromises required to govern this time will be even more unattractive.