TWO weeks before Easter Sunday, Morena is taken out. Symbolising death, she is taken out of the village/town and thrown into the water - even being lit on fire beforehand - to signify that winter shall come to an end. 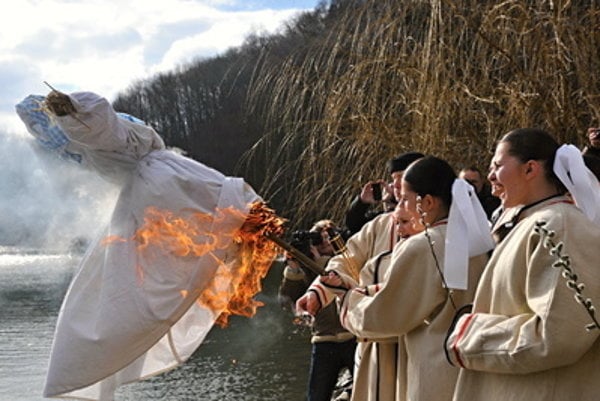 Morena, somewhere, symbolises death and on this day she is taken out of the village or town and thrown into the water (being lit and burnt before, in some places), symbolizing that winter shall come to an end

This tradition has been revived recently in Slovakia, livening up the welcoming of spring. Morena, also called called also Marmuriena or Kyselica in some places, is an effigy stuffed with straw dressed in female clothes. She symbolises the pre-Christian wish to get rid of risks stemming from the winter and connected with this time of the year. It is mostly young villagers who take out Morena, and she is bid farewell after being accompanied by an entourage singing traditional songs, the SITA newswire wrote. Then, villagers return home running so that the Death cannot catch them, and bringing the symbol of spring, letečko (or little summer), in the form of willow or birch branches. 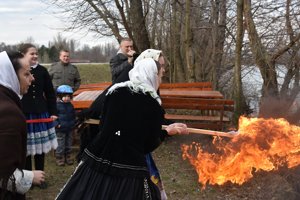 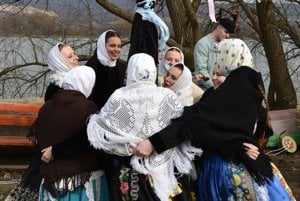 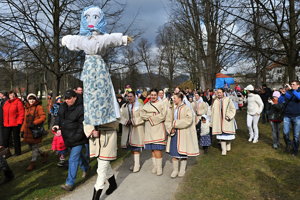 Slovak traditions include taking out Morena and burning her, two weeks before Easter. (3 photos)

In some parts of Slovakia, this fifth Sunday of Lent is also called Šúľková, according to the traditional meal eaten on this day, šúľky or šúľance, i.e. long thin rolls made of potato dough that resemble well-grown ears of corn, symbolising the wish for a rich harvest and plenty of bread in the upcoming year.

In some churches, the habit of shrouding crosses and statues in purple cloth has been preserved, to show the humiliation and sorrow connected with Jesus’ upcoming torture and death.

In several places throughout Slovakia, Sunday March 13 saw Morena carried out and drowned. In Veľké Teriakovce, in the south of Slovakia (Rimavská Sobota district), this event included a procession across the village, all the way to the water mill on the Rimava river where Morena was torched and thrown into water. For several weeks to come, her “Life” sister Živena will be exhibited in the village centre – a dummy 3.5 metres tall from coniferous branches and straw, clad in female clothes. Accompanying events included music and dance performances of folklore groups and a market presenting old crafts, Marian Hano of the Teriakovčan civic association informed the TASR newswire.

Although the dates of Lent (period of fasting before Easter in the Christian church) and Easter move, people still express the folk saying: “Before the Passion comes, there will be no warmth.”