SOME are inventors and others patch holes in what the former invented. 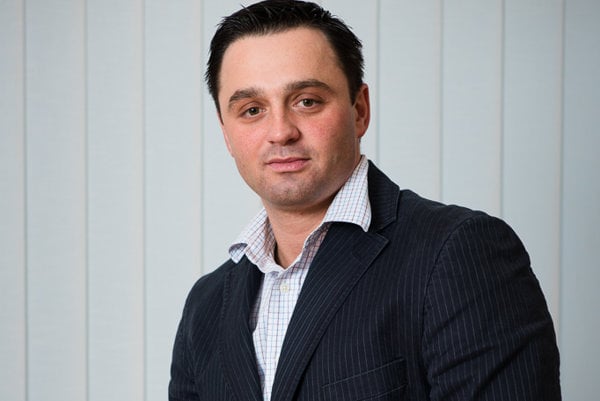 IT expert Jozef Végh feels somewhere in between, as one of his basic axioms when doing business is to listen to what the market and clients require. The Slovak Spectator spoke with Végh about email archiving and information management, his internationally successful product, and about why he launched his IT company, TECH-ARROW in Slovakia.

The Slovak Spectator (TSS): The fourth industrial revolution has become a regularly discussed topic. What do you understand from this term?

Jozef Végh (JV): For the first industrial revolution the steam engine was fundamental, but today we are somewhere else completely. I think that in terms of informatics it is the Internet of Things (IoT), i.e. when something physical joins with the virtual world, for example smart control of cars or towns, or your fridge will order your food. For example, Tesla is already testing autonomous or self-driving cars, and I expect that autonomous trucks that will start to drive on our roads. There will be more automation, which will have an impact on the labour market. People will need to be more educated as simpler work will be done by robots, while there will be a need for services.

TSS: Is it possible to make plans in IT with respect to the speed with which technologies develop?

JV: Steve Jobs said: “You can’t connect the dots looking forward you can only connect them looking backwards,” which means that only when you are successful can you say how you have reached that success… You should choose a path, stick to it, but also be open to new impulses. Your way does not need to be straight, but you should not lose momentum.

There are several types of people: some are like Elon Musk [of Tesla] or Steve Jobs or Bill Gates, who create something world-shaking and then there are people who patch up holes. Here I would recall the words of a friend of mine, who also works in IT, who said: “I have never made up something new. I only watched what others do and improved it.” I am somewhere in between. I also invent new things, but as I do B2B [business-to-business], I try to listen to what the clients and the market require and deliver what is missing. Also, I think that an element of naivety, and a conviction that anything is possible, is needed too.

TSS: You developed a successful software product for archiving emails. How did you come to the idea that this is a sector with potential?

JV: After graduating in informatics in Bratislava I went to work in Vienna where I got a job in the H&S Heilig und Schubert Software company. There we worked on classical document management like scanning documents, saving documents, classification, passwords, etc. It was 2002 and people started to ask about emails. As I believe that it is necessary to listen to customers, we designed an Outlook application for archiving emails. Actually what happened during the dot.com bubble and the fall of Enron as well as the whole Arthur Andersen scandal, when many documents were shredded, resulted in adoption of the so-called Sarbanes–Oxley Act in the USA. It was aimed at improving corporate governance and accountability, but part of it was actually a digital archive of all documents.

On this basis several solutions for archiving emails were developed, as email is also a digital document. Another requirement from customers was a virtual email box. As it was almost 15 years ago and hardware was very expensive, email boxes were small and limited, as were emails. We solved both these aspects in our product, exchange@PAM which became successful initially in Europe. In 2007 US Sunbelt Software company approached us with an offer for cooperation after our product came out as the best in comparison with eight similar products. We developed together the Sunbelt Exchange Archiver (SEA) based on our original product, for which we received Best of IT Channel Vision, which is known as the IT Oscar, in 2007. [Slovak IT security firm] ESET received this prestigious award too, but one year later. In 2008 the first investor called us and in the end we and our Austrian partners sold the product for an eight-digit sum.

TSS: Are there still gaps in the market, such as email archiving once was?

JV: Actually, after email archiving we began to work on migration, which includes, for example, migration of electronic documents of one company from one system into another one, or into the cloud. But as a lot of people do not fully trust the cloud, they require hybrid solutions. And we will see what direction the market will take.

TSS: What has the success of your email archiving product brought you from a professional point of view?

JV: I learned a lot, as it got me amongst people from New York, Wall Street, venture capitalists, etc. This was also why we did it, i.e. to have a closer look at business and financial processes and to better understand the market. I travel abroad a lot, and what I hear there is that we have good technicians, but few businessmen who handle numbers well. Thus my vision was to comprehend the market and develop a product that would be not only good from the technical point of view but also successful financially. It also brought us a lot of new contacts, clients and new products. And I invested into my current company.

TSS: Why, after working a lot abroad, have you launched your current company in Slovakia?

JV: I come from here, I have family here and I feel good here. When I started to work in Austria back in 2001, as Slovakia was not a member of the EU, I had to get many documents and permissions. But after Slovakia entered the EU there is no more need for this. Moreover, the position of Bratislava is very good – we are close to Vienna and several international airports, which means that within two or two and a half hours you can get to many places, and I think that in terms of this Bratislava’s position is better than, for example, that of Prague. Moreover, the IT scene in the Bratislava-Vienna-Budapest triangle is very dynamic, with new technologies and a lot of startups. Last, but not least, IT is a sector in which you do not need to be physically somewhere to do your work.

JV: The German-speaking market is close to me. I learned German as a kid and also it was the German market in which we succeeded with our product for email archiving. And Austria is just around the corner.

In terms of launching a branch abroad, this is to enhance our profile, as we still fight with the fact that we are from the East. This is simply the mindset of people and Slovaks are not immune to this either. This also increases our chances on German-speaking markets to sell our products as Germans are more prone to buy products from Germans.

We launched the branch in Nuremberg in 2013 with one business partner. But now we are changing this model and our goal is to have a virtual office in any bigger town in Europe. We will have a branch office in Berlin as there is a strong startup hub there, while my plan is to help Slovak startups to establish themselves abroad too. There are a lot of smart people and companies in Slovakia, but only a few of them are internationally successful. We have ESET, Sygic, Pixel Federation and some more, but I would like there to be more of them.

TSS: The cloud makes the issue of protection of data on the internet even more crucial. What are the possibilities to improve this protection?

JV: Security is important also for the Internet of Things when, for example, there will be a need to secure a freezer in order that somebody does not re-programme it for de-frosting.

In terms of protection it is especially the human factor that fails. I believe that the weakest link in this chain is and will be the human being. There are plenty of antivirus, antispam or antimalware products, but it still happens that somebody unauthorised gets data. My opinion is that people are little educated in this field and thus when installing something they click on everything without reading what will this mean for them.

Another aspect is passwords. There are a lot of password-saving apps people can use, for example. People should also change passwords regularly. All these require discipline, but the minimum they can do is to have one type of passwords for various categories like one for work and another for the internet. Also people should be careful when using freeware or shareware as I believe that nothing is for free.