People protested in downtown Bratislava against the new government coalition. 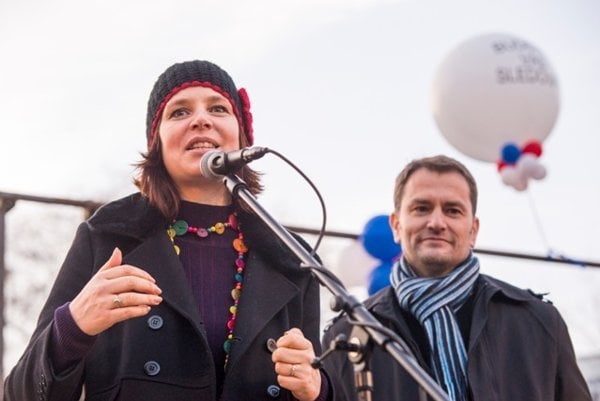 On March 18, the popular protest against the government that was born in the aftermath of the March 5 general election was attended by hundreds of people, according to the SITA newswire.

It was supported by several politicians, especially by the Freedom and Solidarity (SaS) chairman Richard Sulík and Ordinary People and Independent Personalities-NOVA (OĽANO-NOVA) chairman Igor Matovič. Both SaS and OĽaNo are currently in opposition to the coalition composed of Smer, Slovak national party (SNS), Most-Híd and Sieť (Network).

Opposition politicians criticised especially the leaders of two rightist parties, Most-Híd and Sieť, who first tried to form a rightist coalition with SaS and OĽaNO, before agreeing to start negotiations with Smer (and SNS), which won the election but needs partners to form a government and majority in parliament. Opposition leaders deem such behaviour a betrayal of voters and a service to oligarchs and big money, instead of serving the country.

Some show-biz celebrities appeared, too, protesting mostly against the behaviour of Banská Bystrica regional governor Marian Kotleba who oppresses theatres in the region and recently even stopped a theatre performance ordered by the self-governing region halfway through.

The peaceful  meeting started at 17:00 and lasted for about an hour.

Matovič deemed the Friday, March 18, meeting successful but said, as quoted by SITA, that he did not know whether it will be repeated. 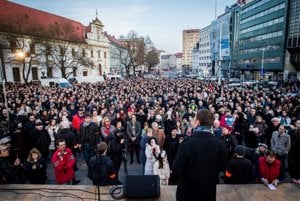 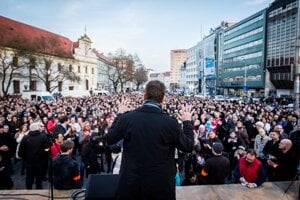