Ministers for new cabinet are chosen, coalition agreement to be signed Tuesday afternoon. 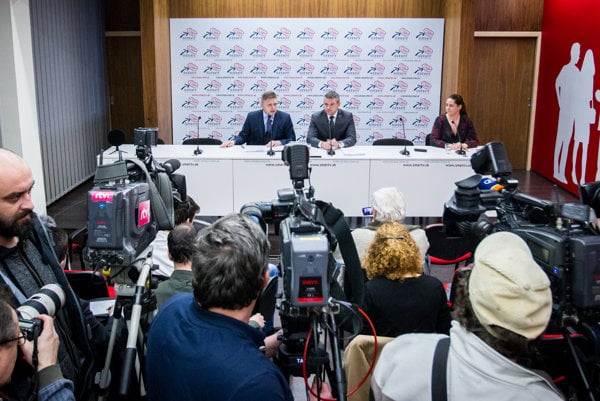 Fico himself will be the prime minister, while former parliamentary chairman Peter Pellegrini will be given the post of vice-premier for investments. Five current ministers will retain their posts in the new government - Robert Kaliňák (Interior), Peter Kažimír (Finance), Miroslav Lajčák (Foreign and European Affairs), Marek Maďarič (Culture) and Ján Richter (Labour, Social Affairs and the Family).

The SNS has already nominated Peter Gajdoš as the new defence minister, but it is still pondering whom to nominate for the posts of ministers of education and agriculture. It is deciding between Helena Poláková, Peter Plavčan and Ľudovít Hajduk when it comes to the post of education, science, research and sport minister. With respect to the agriculture and regional development minister, names such as those of Vladimír Chovan (agriculture minister between 2009-2010) and forestry expert Jaroslav Regec have been put forward. The names of two other candidates have not been revealed, according to TASR. The party will announce its official nominations on Tuesday, March 22.

Most-Híd will have two ministers in the cabinet as Lucia Žitňanská will become the next justice minister and Lászlo Solymos will become the environment minister. Party leader Béla Bugár will run for a parliamentary vice-chair post. Most-Híd will also occupy five state secretary posts, namely at the justice, transport, education, environment and labour ministries.

Sieť is nominating Roman Brecely for the post of the transport minister. The party has also nominated its vice-chair Andrej Hrnčiar for the post of parliamentary vice-chair. Sieť should also be given three posts of state secretaries at the ministries of defence, agriculture and, most likely, culture.

Signing of the coalition agreement

Representatives of Smer, SNS, Most-Híd and Sieť will sign the coalition agreement on March 22, afternoon, with the outgoing cabinet to hold its final session in the evening of the same day. The new parliament is scheduled to have its inaugural session on Wednesday, March 23. Fico’s current cabinet will subsequently resign, and the process for inauguration of his third cabinet will be launched.