In most Slovak animal shelters, illnesses and insufficient care are a rare problem, veterinary doctor says. 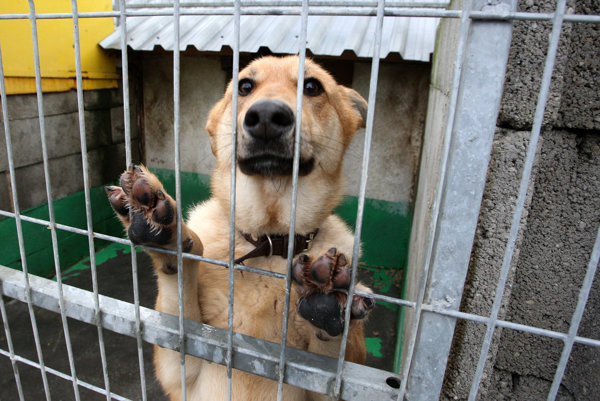 After her good experience with walking dogs from the quarantine station in Zvolen, Dominika Božiková decided to adopt one of the dogs. But just a day before she was due to take the dog home, it died from an illness it most likely caught from the other animals sheltered at the station.

“They told me that as a puppy it was prone [to illnesses] and that it is never safe there, so [such end] was not unexpected,” Božiková told The Slovak Spectator.

Illnesses and insufficient care are the most often cited reasons why people hesitate about adopting animals from shelters. Such problems were also voicedin an article in the New York Times earlier this year, on problems with conditions in animal shelters in New York recently.

In most Slovak shelters, however, such problems are rare, according to Róbert Maňko, president of the Slovak Association of Small Animal Veterinary.

As a vet, Maňko has largely positive experiences with care for animals in shelters. He said he has treated dogs and cats that were in very good shape, nutrition- or health-wise, but he also treated animals from shelters who had fleas, scabies or other diseases. The Association of Animal Protectors is also devoted to taking care of animals. They finance their activities from their own resources. As of the end of 2015, the Bratislava municipal authorities terminated the association’s lease agreement.

How to adopt an animal

When adopting an animal, one needs to consider the options, and find the place for a new additional inhabitant in their free time. Much also depends on the choice of the animal.

“Obviously one needs to realise that they are animals with unknown history,” says Maňko. It is often unclear what the animals have been through, and it is hard to estimate how they will react, and what could irritate them or make them react aggressively.

“It is thus necessary to be careful,” Maňko said. He however believes that with sufficient love and care many bad habits can be eliminated, because the animals are very thankful on the other hand.

When a found animal is brought to the shelter, the staff fills out the admission protocol that contains all the available data about the animal and the person who found it. If the animal is injured or obviously sick, they bring him to the veterinary clinic immediately, according to Ľubomíra Baleková from the shelter in Piešťany. The vet examines and treats the animal. If the animal shows no signs of illness, it is examined at a regular weekly inspection by the vet directly at the shelter.

“We provide health care to the animals during their whole stay at the shelter,” Balekova told The Slovak Spectator. “We try to get the animals to new owners in a good shape.”

There are 40 stalls and sheds divided into three separate sites in the Piešťany shelter. The stalls are thoroughly cleaned on a daily basis, and carpets and blankets in the sheds are exchanged. Dogs are left to run freely at the individual grounds during the cleaning of the stalls minimum twice a day according to their tolerance. In addition, volunteers come to walk them.

Dominika Božiková also has the experience of walking dogs: the quarantine station in Zvolen mainly allows dogs to be taken out on weekdays, and needs to be notified in advance. While the station’s staff is active and pleasant to deal with, Božiková points out that the dogs there live in bad conditions. especially they have a lack of space.

“They put even the dogs that don’t get on well together, because there is nothing else they can do, with the lack of space,” Božiková told to The Slovak Spectator.

In fact, the dog that she selected to adopt from the quarantine station died before she was able to bring it home. Later, Božiková contacted the shelter of the Freedom Of Animals organisation and adopted dogs without any problems, as the dogs passed all the necessary examinations.

The Association of Animal Protectors of Slovakia also performs examinations and the initial inspection of the animals is also provided by this association. When animals are brought to the shelter, they have to go to the quarantine area first, according to Iveta Havranová of the association. They are checked by the vet after the paperwork admitting them to the shelter is completed.

The association finances the premises where the animals are located on their own after the Bratislava municipal authorities terminated their rental contract on December 31, 2015.

“They have suspended all our financial contributions in January, so I pay the whole operation of the shelter from my own finances, that I actually don’t even have anymore,” Havranová told The Slovak Spectator. “If the Austrian conservationists didn’t help us, the shelter wouldn’t exist.”

The authorities, however, do not consider the association’s facility at Rebarborova street in Bratislava a shelter anymore.

Ivana Skokanová, spokeswoman of the City of Bratislava told The Slovak Spectator.The facility doesn’t have a registration number from the Regional Veterinary and Food Administration (RVPS).

Due to that, as well as due to other mistakes on the part of the facility operators, the municipal authorities cancelled their rental contract for the premises where the facility was located.