Walks to lecture on racism, fascism past and present

The series of art interventions called A Walk: Art Talking about Fascism of the Past and Racism of the Present strived to combine various activities focused on the wartime Slovak State, neo-Nazism and (anti-)racism impacting the current wave of hate towards migrants. 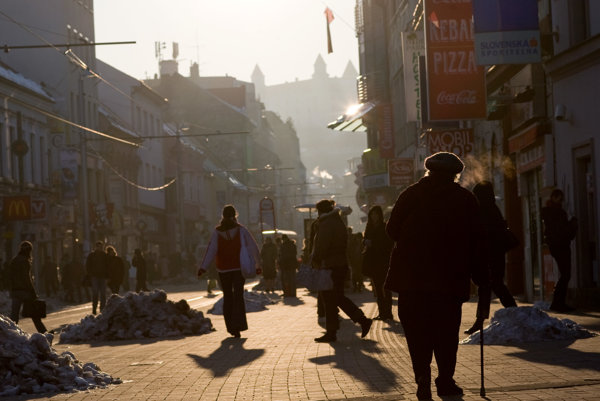 “We launched Prechádzka with intense feeling that instead of coping with the past, we tend rather to forget it, which can support the success of various extremist,” Mirka Grófová of the Open Society Foundation (OSF), the organiser, said. “The recent election has only strengthened our fears.” The more pressing it is not just to talk about what the Fascist regime in the past meant, but also how we can learn from it today, her colleague and co-organiser Michaela Kučová added.

The series of activist and art installations, performances, workshops and online activities aimed at pointing to this issue and to offer the public a different aspect and viewpoint, OSF informed. It took place between March 7 and 14 in downtown Bratislava, and included a reading of text by Michal Habaj, Boris Ondreička and Michal Rehúš; a “live painting” event with refugees form Rohanovce and Daniela Krajčová; art performance by Oto Hudec; activist’s video by Erik Sikora, aka Džumelec; a public photo exhibition by Šymon Klioman; a lectured tour around “Bratislava in 1940” by Salónik & Zaiček; a photo-installation by Tomáš Raffa; and panel discussions and screening of the Saul’s Son film on the anniversary of the Fascist Slovak State, on March 14.

On Saturday March 12 those interested could attend a walk of Bratislava of the 1940s during which architect Martin Zaiček commented on the architectural and urbanistic development of the city. During the walk the architect showed places developed during the 1940s which included the current Freedom Square, Americké Square, Obchodná street and the SNP Square. He talked about what were the plans for development of the capital during that years and under what influences these were designed and which of these plans were built. Another topic was whether politics influences architecture.

“Art and education is the best cultivation tools,” Zuzana Duchová who prepared the architectonic lectured tour, said. “And with the recent election, it gets even more acute.”