Ignoring extremists does not help

Voters who elect extremists allege they do not decide due to media coverage; but rather due to posts and information from social networks. 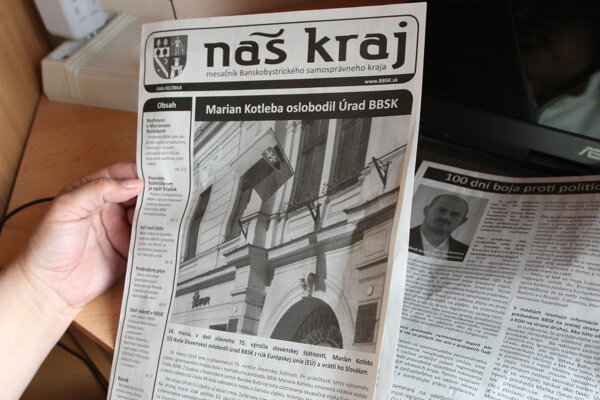 Immediately after Marian Kotleba was elected for Banská Bystrica regional governor in December 2013, and after the outrage of most people dispersed, media – in an effort not to give space to his extremist opinions – partially ignored, partially noticed his slips. Now they are considering how to treat him as a member of parliament.

“Most of all, I lack consequent investigative journalism in regions east of Bratislava,” Radoslav Sloboda of the project WatchBBSK which follows the events in the Banská Bystrica region, told the Sme daily. “The key to solving post-election surprises is to focus on the regions; intensely and consciously.”

Although media and the non-governmental, civic sector question in the long term Kotleba’s claims on how much the regional administration has saved under his control, and point to the cronyism which has become widespread; the election has showed that his popularity is on the rise. Also Kotleba’s voters said already in the past that they do not decide according to news in media.

“Opinions which I see in the region in the long term, but also the general elections have shown that the public is immune to certain types of information in media, Filip Roháček, chief editor of the regional news-website BBonline.sk said. “Some political or cultural authorities have become too little trustworthy for a huge part of people.”

Most standard media either ignored Kotleba as a governor, or wrote negatively about him. Thus, his medium No 1 has become Facebook, Peter Bárdy, chief editor of Aktuality.sk claims. “Facebook offered space comparable to the main TV newscast to Kotleba’s ideas and his campaign. He did not face criticism there, and could use his rhetoric and choice of words without restriction.”

Most national media did not want to legitimise Kotleba by offering him the same space as standard sources, or to put each of his scandalous statements to public space, Beata Balogová, chief editor of Sme, explained. “But some media, like for example the Sme daily, reported critically on his performance as regional governor.”

Media cannot ignore Kotleba and his people, but their ideology and opinions are toxic, totalitarian and against the democratic establishment in which we live, media have to treat them very cautiously, Matúš Kostolný, chief editor of Denník N daily, told Sme.

“It is not the duty of media to give them the same space, nor to approach them on every issue. They are politicians who represent the extreme. The fact alone that they have been elected to parliament does not change anything,” Kostolný summed up.

Journalists of the Banská Bystrica Region agree that most local media reported on Kotleba’s activities in a standard way. “I have not seen any excessive deviations towards huge activity or passivity,” Sloboda said. “Repeatedly, scandals and slip ups connected with Kotleba were in the media.”

The regional Banská Bystrica newspaper MY, owned by Petitpress which also publishes Sme, and the Slovak Spectator tried to cover Kotleba’s promotional activities the least it possibly could and rather focus on cases and scandals, just like in case of other politicians, Kvetoslava Fajčíková of MY claimed.

“All the time, I had the feeling that even if media wrote negatively about him, it was rather a driving engine for his fans,” she explained. “I see it also on social networks that numerous trolls appear under each of negative story who defend him.”

Regional media in Banská Bystrica or other towns of the region have small editorial staff to make in-depth analyses of the performance of Banská Bystrica regional administration. Moreover, the office virtually does not communicate with media and one can only hardly get statements of the region’s leadership.

Thus, the common ways of working on reports and journalistic stories have actually vanished, Roháček says. “The almost single source of information about the work of Marian Kotleba has become, except for his own newspaper and opposition, people from regional organisations who started facing problems, or associations which minutely follow the activity of the region.”

After his inauguration, Kotleba changed the official magazine of the region, Náš kraj (Our Region) into a promo paper which he started using for his extremist ideology, for hailing his own success and for struggle with his critics, Transparency International watchdog states on its website.

When regional councilors stopped the financing of the magazine, he re-named it and published it with money meant for promotional and information documents on the region. Before the general election, the circulation of the magazine increased up to 200,000, one copy for almost every second voter in the region.

“Despite slamming other politicians for abusing power, what Kotleba has shown with the official magazine of the regional administration cannot be called anything but power abuse,” Michal Piško and Gabriel Šípoš of Transparency International claim.

The conspiratorial Banská Bystrica radio Slobodný vysielač (Free Broadcaster) paid special attention to Kotleba, probably because both the governor and the radio have focused on a similar target group, according to Sloboda. “Kotleba started to express his opinions ever more on issues which are interesting for conspiratorial media; like the questions connected with the European Union, NATO or even resentment towards vaccination.”

What about the future?

Chief editors and heads of news divisions suggested they are discussing how to approach Kotleba after the election. “Ignoring him hasn’t helped, this is what election taught us,” Bárdy opined. “Media, as us as well, will have to be self-critical and re-evaluate whether they do a disservice by their engagement.”

Media have to talk with Kotleba and try to disclose his positions and background, says Kostolný. However, part of the informing must also be the context. The chief editor added that they will call Kotleba’s party as Fascists, neo-Fascists and extremists.

“We are an unbiased and impartial TV channel, offering space for statements to all relevant political parties,” said Henrich Krejča, head of the newscast for TV Markíza. “But we refuse to give space for spreading racism and xenophobia.”

Chief editor of the Pravda daily, Nora Slišková, stresses that connections and context are key in such decisions; which has to be constantly stressed and mediate to public. “Media cannot be the mouthpiece of extremists.

Sme will not ignore Kotleba, either, as he has become an MP and his activities will be under scrutiny. The daily will remind readers of who Kotleba is, according to Balogová, and that he has come from a neo-Nazi sub-culture, while also explaining more the history and putting Kotleba in context.

“We will not offer him space without good reason, and uncritically, especially not to defend the indefensible: ideas and ideology which suppress human rights and are in conflict also with the Constitution,” Balogová summed up.