No Slovaks among victims in Brussels

Flags in front of the Presidential Palace will fly at half-mast to pay tribute to the victims of the Brussels bomb attacks. 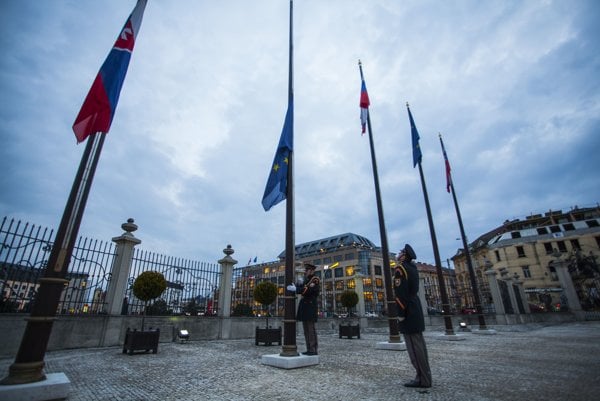 The leaders of four coalition parties honoured the victims of the March 22 terrorist attacks, which claimed at least 30 casualties and more than 200 injured, with one-minute of silence when signing a coalition agreement.

“This important act [of signing the coalition agreement] took place in the shadow of tragic events,” incumbent Prime Minister Robert Fico said, as quoted by the TASR newsiwire. “As prime minister I’m expressing my full solidarity with the Belgian prime minister [Charles Michel], as a citizen with all the Belgian people, and as a human being with all who lost their relatives and friends.”

In response to the attacks, Slovak President Andrej Kiska decided that flags in the Presidential Palace’s front courtyard should fly at half-mast to pay tribute to the victims.

“Our society mustn’t be overcome by fear,” Kiska said earlier in the day, as quoted by TASR, adding that it is “terrible that even in the current, modern world there are people who’re able to commit such terrorist acts”.

Meanwhile, the Slovak Foreign Affairs Ministry confirmed that no Slovaks died or were injured in the attacks. Ministry’s spokesperson Peter Stano also clarified the information which appeared in the media that two Slovak citizens were injured.

“Based on specified information, these were Austrian citizens who are related to a Slovak intern in Brussels,” Stano told the TASR newswire. 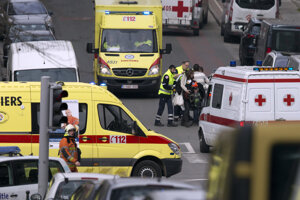 Attacks not a surprise

Security analyst Jaroslav Naď said that the explosions in Brussels were not a surprise, as the Belgian capital is among the cities under an enormous threat of terrorist attacks.

“It’s because it’s at the heart of Europe, and the community of the powerful converges there,” Naď told TASR, adding that such attacks cannot be completely prevented. He noted that the blasts might be a response to the arrest of several radicals, including Salah Abdeslam, who is suspected of involvement in the attacks in Paris last November.

Naď noted that one of the explosions at Zaventem airport occurred at the American Airlines booth, while the one at a metro station was near the EU institutions.

“It’s as if they’ve attacked the USA and the EU,” the analyst continued.

Another analyst Milan Žitný said that the blasts at an airport and metro station were probably a reaction to the arrest of Abdeslam, the main mastermind behind the November terror attacks in Paris. It needs to be taken as a warning to the heart of the EU, he added.

“We need to be serious about this, as the EU administration as well as NATO administration for Europe is there [in Brussels],” Žitný said, as quoted by TASR. “It also gives a very bad reputation to Brussels’s intelligence services and the police force.”