All newly elected MPs have sworn an oath for the next term, they also held a minute of silence for the victims of Brussels attacks 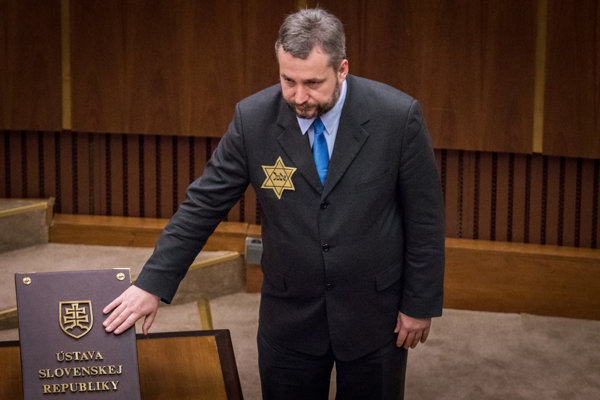 PARLIAMENT convened in its new composition for the first time on March 23. At the inaugural session, MPs swore the oath as required by the Constitution and elected the parliament’s speaker and his deputies, as well as heads of parliamentary committees.

Prior to swearing their oaths, the parliament held a minute of silence in memory of the victims of terrorist attacks in Brussels from the day before.

As the ruling coalition agreed, the MPs have elected head of the Slovak National Party (SNS) Andrej Danko to the post of parliament speaker, one of the top three constitutional posts in the republic. He was elected with 112 of the 146 valid votes in the secret ballot. There are 150 MPs in the parliament.

Andrej Hrnčiar of Sieť, Béla Bugár of Most-Híd, and Martin Glváč of Smer will serve as Danko’s deputy speakers. Lucia Nicholsonová of Freedom and Solidarity (SaS) was elected the fourth deputy speaker, a post which traditionally belongs to the opposition.

After he was elected, Danko took over presiding over the inaugural session. In his first speech to MPs he stressed responsibility.

“In politics, I have always wanted to be the one who does not endorse xenophobia and racism,” Danko said as quoted by the Sme daily. Referring to the Brussels terrorist attacks from the day before the session, Danko said he realized “how dangerous it is to use weapons and solve problems with violence and play on the lowest instincts and emotions”.

Words are the only weapon that MPs should be using in the parliament, Danko said, and added that human rights should be key for all Slovakia’s policies.

The reason why Danko mentioned weapons was the incident from earlier on March 22, when the newly elected MPs first came to the parliament to talk about the division of posts in the parliamentary bodies. One of the ĽSNS MPs, Peter Krupa, brought his pistol to the parliament. After he revealed he was carrying a weapon during the security check, he deposited it in the chest of the security service.

After the official inauguration, MPs and their assistants are no longer required to pass security checks.

Many of the MPs have expressed their concerns over their colleagues carrying weapons to the parliament.  Another ĽSNS MP, Milan Uhrík, admitted the party’s MPs carry weapons and they deposit them with the security service when entering parliament. He insisted they felt threatened.

“Our members have been several times assaulted by activists and junkies,” he said as quoted by SITA.

Newly-elected deputy speaker Lucia Nicholsonová also said that she will take efforts not to let weapons into the parliament.

“Various emotions occur in that room,” she explained. “I don’t want to wrong anyone, maybe they are mentally stable, but maybe they’re not.”

Star of David in parliament

No incidents have been reported during the inaugural session of the parliament.

Two MPs, Ondrej Dostál elected for SaS and Viera Dubačová from the OLaNO-NOVA slate, came to the parliament wearing the Star of David, to commemorate Germany’s transformation into a Nazi dictatorship on this day in 1933, as they said. 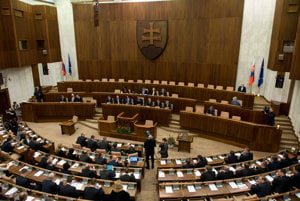 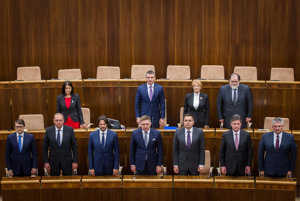 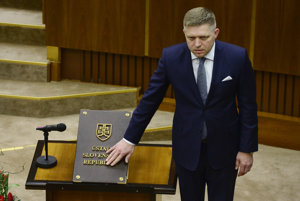 The inauguration of new parliament (7 photos)

They also wanted to point to the dangers of having fascists in parliament, they said as reported by the TASR newswire.

“It’s meant to honour human dignity and freedom, to which every activity in the state apparatus should be submitted,” Dubačová said as reported by TASR.

Pointing out to fascists in parliament is connected with the far-right People’s Party – Our Slovakia (LSNS) elected into parliament. The party’s MP Milan Uhrík said it was “circus” to wear the star in the parliament and refured his party to be labeled fascist, TASR wrote.

Only Sieť without a caucus

At the inaugural session the parties represented in the parliament also formed their respective caucuses and elected their heads.

The Sieť party, which originally had 10 MPs elected to the parliament but three of them left the party before the inaugural session of the parliament in protests to the party joining a ruling coalition with Smer, will not have a parliamentary caucus. The minimum of eight MPs is required for a caucus to function, and Siet only has seven MPs.

According to earlier reports the MPs were considering joining the caucus of Most-Híd, but in the end they will remain outside any caucus, the party’s head Radoslav Procházka confirmed.

Smer has the strongest caucus, with 49 members. It is headed by former defence minister Martin Glváč. The head of the SaS caucus, with 21 MPs, is Martin Poliačik. Richard Vašečka will head the OĽaNO-NOVA caucus which includes 19 MPs, while the SNS caucus with 15 MPs is headed by Tibor Bernaťák. Parliamentary newcomer ĽSNS with 14 MPs is headed by its chairman Marian Kotleba, while another newcomer, Sme Rodina, has 11 MPs and is headed by Boris Kollár. Most-Híd’s caucus includes 10 MPs (one of the MPs elected on the party’s slate, Zsolt Simon, did not join the caucus after he left the party in response to the party joining Smer and SNS in a ruling coalition). The caucus is headed by MP Gábor Gál.

Following the session, the outgoing cabinet of Robert Fico, Slovakia’s first-ever one-party government, is expected to submit their abdication to President Andrej Kiska, thus making way for the new cabinet to step forward with its programme statement and ask the new MPs for their trust.

The new cabinet, formed by Fico who will remain in the prime ministerial chair for the next term based on the coalition agreement, now has 30 days to be approved by MPs.

Ministers of the outgoing cabinet were present in the parliament for the oath ceremony. Many of them were elected MPs from the slate of Smer. If the parliament okays the new cabinet, they will vacate their parliamentary chairs and will be replaced by the candidates next in line on their respective slates.