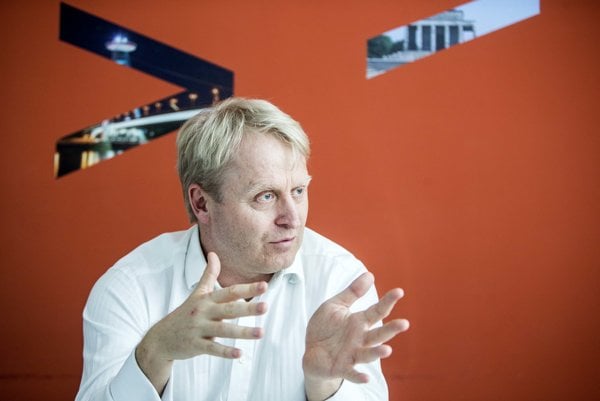 PETER Škodný believes that to behave responsibly today means to behave responsibly towards future generations. This is also why he included among the main priorities for his two-year presidency of the Business Leaders Forum (BLF) in 2016 and 2017 the pursuit of business ethics, transparency, rule of law and diversity. But the main goal, on which they all concur in the BLF, is to have a vision for Slovakia for 20 years and beyond. The Slovak Spectator spoke with Škodný about his priorities, corporate responsibility in Slovakia, and more.

The Slovak Spectator (TSS): What is your definition of a responsible company?

Peter Škodný (PŠ): We can talk about ethics or other things, but I use a historical definition that a responsible company is a company whose director can each morning stand up in front of a mirror and shave without pondering why he is standing here again. This means that it is a company in which one does not need to fear that employees start to ask what is written about it in newspapers. But the most important is that people do not feel ashamed of the company and its management.

TSS: What are your plans and goals you would like to achieve during the next two years in your position as BLF president?

PŠ: The BLF is unique in how it unites companies. Compared, for example, with chambers of commerce or employers’ associations pursuing certain common interests, the BLF does not depend on anything or anyone. Actually, this implies for us that the BLF is an organisation that can become something that shelters and joins – meaning it pursues themes that are common and important for all of Slovakia.

The main priorities are business ethics and transparency, the rule of law and diversity, but the most important goal is to create a vision for Slovakia so that there are people able to work in Slovakia in 20 years, that companies can exist here, and – as now all are talking about elections – that there are people at all interested in governing Slovakia.

TSS: The BLF has an ambition to shelter initiatives by chambers of commerce and industry. Could you specify your plans and goals in this direction?

PŠ: Basically it should be something similar to the joint Rule of Law Initiative originally started under AmCham, the American Chamber of Commerce in Slovakia. Of course, first we have to wait for a new government and based on this we will agree on the next steps. But certainly we will want to have a clear vision of Slovakia, because from this everything will unfold including education, subsidies, and so forth.

The framework within which we will move in the long term and within which economic and regulatory rules should be set, laws adopted, requirements for education drafted and so on, needs to be clear. This means that when we speak about being responsible in doing business what we want is responsibility in governing. And to be responsible towards the future.

TSS: How has the attitude of companies in Slovakia towards corporate social responsibility changed over the last few years?

PŠ: It is impossible to speak about breakthroughs because some things have changed, some not and we are still hearing about deformed parts of the environment. But I think that what is happening in Slovakia is formation of let’s call them islands of positive deviation, and that these are growing. This has been happening due to the pressure of large companies because large international companies are asking the local management what is happening here and they also do not want any negative reporting about them in media. On the other hand it is local Slovak entrepreneurs who have launched companies and especially the young generation that does not comprehend that business can be done in a non-transparent way. The question is how big these islands will be, because when a company said in the past that it does not want to do business with the state it was taken for a complete fool. Today I think that there exist relatively many business persons who are very principled in terms of this. And they are principled because sometimes it is very convenient to do business in a clientelistic way, but on the other hand this kills the company in the long term.

TSS: How does the development of CSR in Slovakia compare with abroad?

PŠ: To a certain extent it is similar as well as different. When I take neighbouring ex-communist countries, each developed at its own pace. The Czech Republic had a great advantage that when it started it was in the best shape, also from the intellectual point of view. Poland leapt forward, even though we now can talk about its current political environment. Slovakia, in my opinion, has not fully used its potential because we used to have and still have some goodwill, but I don’t know whether we go at full blast. Some neighbouring countries are developing and moving forward faster.

TSS: Where does the positive attitude of the young generation to corporate responsibility come from?

PŠ: I do not think that it is across the whole generation; there are always some islands, also when we look at election results. I see the relatively long period of time that has elapsed since the fall of the communist regime behind the positive attitude of the younger generation. The second thing is that the youth see positive examples also at home. They have a much more open education, have a much bigger supply of information and make decisions differently. We have in Slovakia companies and young people who are successful in a way nobody assumed in the past that can be successful, whether we look at startups or companies. WebSupport, Pixel Federation, Profesia, or Pelikan, these are all example of companies that grew from almost nothing and are successful because they do their business well.

TSS: Slovak companies often do their CSR activities in fields which the state should take care of, like education or health care, what do you think of this?

PŠ: Firms certainly should not substitute the basic functions of the state; their activities should be rather a type of extension. For example, to create conditions for students who otherwise could not study at top universities. The companies should devote their CSR activities to things that are important to the country’s long-term future as politicians often behave – in order to get re-elected – in a way that means they are not willing to pursue long-term solutions. For me, to behave responsibly today means behaving responsibly towards the next generation.

TSS: One of the topics of a responsible approach to doing business is also combating corruption or clientelism, and it is often mentioned by the IT sector. How do IT companies influence the situation? And, according to you, it is possible to achieve these changes without the state’s involvement?

PŠ: There are a lot of strong words about combating corruption, but effectiveness should also be taken into account. This means that the state or its bodies or local or regional organisations start procuring really effectively, either services or goods, and people start asking whether they get the best possible value. At that moment, the room for corruption is dramatically reduced. At present, we have a problem that nobody asks about the price and what they will get for it, meaning efficiency. Everybody complains about awful health care, awful education, we have awful roads, everything is awful. But when we compare what all these actually cost, then we cannot say that this condition is caused by too little spending, but rather the reason might be that the efficiency is not as high as it should be and that the final value is not what it should be.

TSS: In Slovakia companies as well as employees can assign a portion of their paid corporate and income taxes to non-governmental organisations. On the one hand this scheme is appreciated but on the other hand its critics claim that this does not technically mean corporate philanthropy because the donor is only deciding about usage of a portion of the tax paid. How do you perceive that arrangement?

PŠ: It is at least some philanthropy. I am not a tax expert, but it is always about the extent of the tax burden and thus depending on this the philosophy of donorship may be different. Simply, there was some philosophy chosen, whether good or bad.

But I think that we in Slovakia have a different problem and this is that there is a relatively high number of people who could donate but do not donate because they ask what they will get in reward. Simply people are behaving as if what is happening here does not matter them. But people have to realise that this touches upon them and that they should not donate only because somebody is forcing them to do so or that it is advantageous for them.

PŠ: In case of a slip-up, then a discussion behind closed doors takes place. Here the company can explain what has happened. It is not an extra friendly discussion, but very open because the advantage of the BLF leadership is that all are experienced professionals who do not need to behave extremely diplomatically because they pursue one common goal.

In a case when somebody is reformed and wants to become the member, it is always an individual discussion. This means that we cannot be black-and-white because the world is changing. When we look at history, also many companies that are now successful and corporate responsible, maybe at the beginning of their existence were not so clean – here I am not speaking about Slovakia. Each case is individual and I think that the BLF leadership is senior and professional enough to decide correctly.

TSS: Companies are already complaining about a lack of qualified labour and the prospects are not optimistic. Should it matter whether a company follows CSR principles when people are deciding whether or not to take a job?

PŠ: Certainly. This is another factor that should be taken into consideration. The experience of our company is that people ask us why we do not want to do projects with the state. It is a completely legitimate question. People do not like when something negative is written about the company where they work.