Two-thirds of waste still ends up in a landfill. 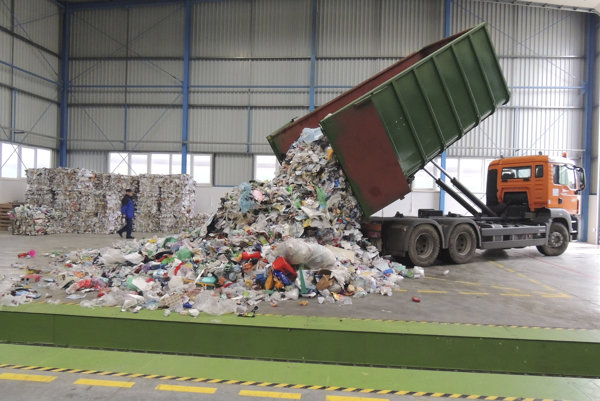 While other European countries have been moving toward a so-called circular economy – where waste is reused, repurposed or produced at a slower rate – Slovakia continues to lag behind the overall idea, as well as in terms of the amount of municipal waste that is treated.

“Slovakia is at the bottom end of all statistics in the field of waste management throughout the European Union,” Environment Ministry spokesman Maroš Stano told The Slovak Spectator, adding that only Romania and Bulgaria lag further behind.

A circular economy relates not only to recycling, but also using the fewest possible resources throughout the consumption chain, as well as keeping products durable, repairable and eventually recyclable or usable for energy.

The idea encompasses behaviour as well as developing new products and services, according to Soňa Antalová, environment expert and managing director of the company ECO-AS.

Other waste ends in illegal dumps, according to the latest data published by Eurostat, the EU statistics office.

In comparison, Denmark recycles and composts almost half of the waste it generates.

Slovakia’s results are weak despite the fact that systems to salvage and assess waste have absorbed a great deal of money in recent years, Antalová said.

“Although the infrastructure is built often with oversized capacity, we are unable to increase waste recovery,” Antalová said.

Infrastructure is, however, inappropriately conceptualised and localised, according to Radoslav Košík, general director of JRK Waste Management focusing on reducing municipal waste.

“Recycling centres, collecting yards and compost plants are not situated according to needs of cities, municipalities and regions,” Košík told The Slovak Spectator.

The Association of Producers of Appliances for Recycling – Envidom sees a problem in the prevalence of regulations.

“The financial viewpoint which begins and ends with consumers ultimately affects the outcome,” Peter Valent, general director of Envidom, told The Slovak Spectator.

A precursor to the circular economy is a recent amendment on the Waste Act which changes the hierarchy of waste management. Whereas the main priority is to prevent excess waste, the act extends principles of business responsibility, according to the ministry.

“Producers are obliged to remove not only sorted packages, appliances and batteries but also old vehicles, tyres and non-packaging products,” Stano said.

In addition, if municipalities conclude an agreement with a producer, they have to bear costs only for mixed municipal waste, Stano said.

“Producers and importers have to take care of all sorted folders of municipal waste,” Stano said, “thus municipalities and their residents would sort out most waste in their own interest.”

Municipal costs are expected to drop by nearly a third, or €30 million.

“If the amount of damage caused by illegal landfills exceeds €266, the police will begin to act in line with the Criminal Code,” Stano said.

Antalová criticises the rigidity of the changes, which places everything related to waste management on the same level.

“The aim to simplify legislation according to the directives of the European Union somehow faded away,” Antalová said.

Producers accept the amendment in different way. Envidom welcomes rules which should oblige municipalities to increase, improve and develop the system for collection and recovery of waste permanently.

Significant changes arise in the field of biodegradable waste, according to Košík.

“Now, restaurants are obliged to sort out this kind of waste by themselves,” he said.

The construction sector, which creates almost half of all waste, is the most critical. Ludvik Jančo, chairman of Association for Development of Recycling Building Materials (ZRSM), does not see maximum support in the area.

“There is a long-term lack of communication between competent subjects,” Jančo said, adding that it resonates also from the statements of some authorities of the ministry.

From the global point of view it is essential to disadvantage land-filling in favour of more efficient economic instruments and create a market for recycled materials, Antalová said.

“We need an overall strategy for the management of waste with a long-term vision to at least 15 to 20 years which would address each phase of the life cycle of products according to the method Life Cycle Assessment,” Antalová said.

Košík agrees with the formation of the concept for development of waste management that could bring optimal economic as well as environmental results.

For example, the Czech Republic established the Institute of Circular Economy last year which aims at application of idea into practice, Košík said.

“The institute has become a relevant partner for the private and, especially, the public sector,” Košík said.

Jančo said that society must come to a proper understanding of construction waste not only as an environmental factor but also as an economic category.

“Consider waste as material for recovery and reuse,” Jančo said.

“Slovakia and some other states have specific exceptions for achieving the required degree of recycling or land-filling,” Stano said.

Stano added that a concrete result of negotiations about package depends on the ability of the Dutch presidency of the union to bring a compromise proposal.

“After that the Slovak presidency will make a final draft of the directive,” Stano said.