Slovak society seems to be distrustful of corporations: more than half of its citizens (52 percent) do not trust firms or what they say. 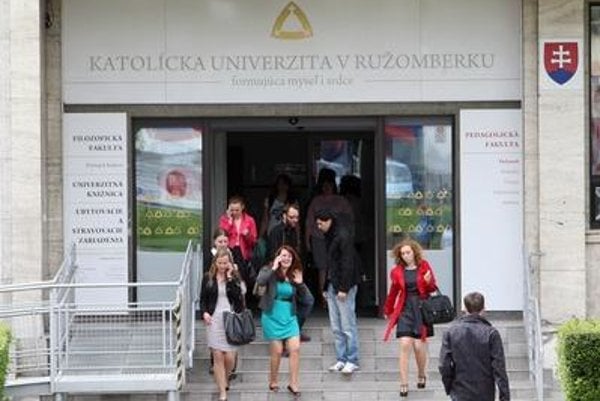 The poll showed that as many as 73 percent of Slovaks trust educational institutions. (Source: Sme)
Font size:A-|A+

On the other hand, 40 percent of respondents trust companies and 1 percent do so absolutely.

This stems from a poll scrutinising the perception of corporate social responsibility by the Slovak public made last year by the Focus agency on a sample of 1,027 respondents for the Business Leaders Forum (BLF).

This distrust by Slovaks towards companies is a remnant from the past, “when we had huge frauds on people here, and general distrust prevailed in Slovak society”, the executive director of the BLF, Michal Kišša, told the TASR newswire. A similar worldwide poll implies that 57 percent of people trust companies.

However, the situation is gradually changing, according to Kišša; people trust a little more than they did in the past.

“However, this transformation will not happen from one year to the next, we will maybe get to feel it in 10 years,” Kišša said. He added that companies should strive to work on their communication with the public and to spread truthful information.

“And also make people who come into direct contact with the firm trust it and make them feel that what they buy or get has a real value and use for him,” Kišša summed up.

The first contact is crucial; for both the firm and the potential employee or client. It is possible to recognise an irresponsible company as early as a talk with the first employee. “One can feel the overall atmosphere in the company, and what goes on; information from company employees can also be very useful,” Kišša explained.

The internet, too, can help distinguish a trustworthy company from an untrustworthy one, as a range of information can be found there. “Recently, also thanks to the media, it turns out that employees or clients increasingly require responsible products or services from companies, or responsible behaviour,” he said. “The biggest change can come when a critical mass of people learn about this issue and start pushing for it at companies.”

The poll showed, on the other hand, that as many as 73 percent of Slovaks trust educational institutions, 14 percent of them absolutely. Educational institutions in general are considered more trustworthy elsewhere in the world too, Kišša said. “There is a general notion that educated people work in them, who strive for the best; and a similar situation exists with non-governmental organisations,” he explained.

Of those polled, 36 percent trust the government and 60 percent do not trust it.

Compared to the 1990s, Slovakia has seen a huge shift in corporate social responsibility and doing business, BLF president Peter Škodný told TASR. He added that this topic has become a real issue in Slovakia, but not for everyone.

“People and companies will raise their voices much more,” he said, “and will require ethical behaviour from all, regardless of whether it is in the business sector, or in state administration.”