They earn money to settle their debts. 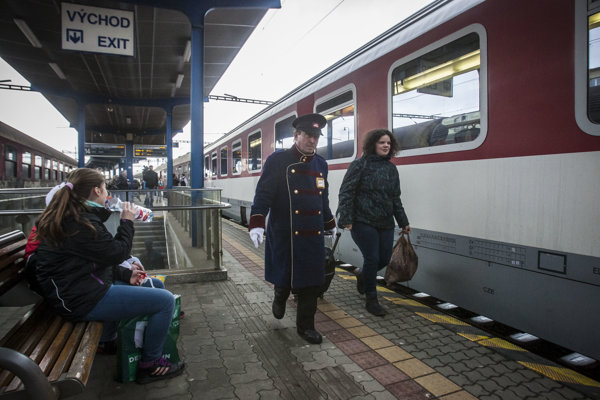 The Proti Prúdu / Against the Stream civic association focuses on homeless people in the Slovak capital and organises activities that could help them – and help them to help themselves.

One recent activity is the Luggage Porters – Nota Bene project. In it, some selected homeless people, selected from those who sell the Nota Bene magazine, and thus earn some money to settle their debts, help people at Bratislava’s main railway station by carrying their luggage. They mainly help women and elderly people carry it up the stairs.

“We just reduce the load on passengers – but also homeless people from their burden of repaying distraint deductions and debts,” Peter Kadlečík, coordinator and social worker of the civic association told the TASR newswire in December. “If they save €50 a month, we give them the same amount as well. These people are exceptional, despite flaws in the social system. Moreover, in Bratislava, housing is expensive and access to jobs is difficult,” Kadlečík summed up.

Slovakia lacks systemic measures and flaws in legislation rob even those active homeless people of a chance to regain a stable and dignified home, said Nora Beňová of the same civic association. She proposes to solve homelessness in a complex way, targeting accommodation, social services, health care, employment, access to material welfare and rights.

“Their effort alone is not enough, changes in legislation are needed,” she explained. “In one year, our organisation invested, together with the porters, €16,000 into the system, in the form of paid levies or debts. All porters are included in the programme of debt elimination.”

Jozef has been working as porter since the project began – December 8, 2014. He is among people, nicely clad in a uniform, and he likes the work, he said. He would like to work normally but debts do not allow this.

Also Laco is thankful for the opportunity to work as a porter. In one year, he reduced his debt by €1,250.

“I decided to announce personal bankruptcy, with the help of Proti Prúdu and lawyers of the Nadácia Pontis foundation who help us free of charge to manage our debts,” Laco explained.

Beňová said that they started with seven porters, had a total of 10 during the whole project, and currently are working with six of them. In one year, they managed to cut their debt by €75,500.

This project of porters is exceptional and it garnered awards abroad. The International Network of Streetpapers deemed it the best non-newspaper project for homeless people in 2015. In Vienna, it received the second place in the SozialMarie 2015 contest, from among 300 competing projects throughout Europe.

The project was supported from Icelandic, Liechtenstein and Norwegian funds managed by the Ekopolis foundation, by the Nadácia pre deti Slovenska foundation and the foundation Socia; as well as by Bratislava city and region, Slovak railways and several other organisations.