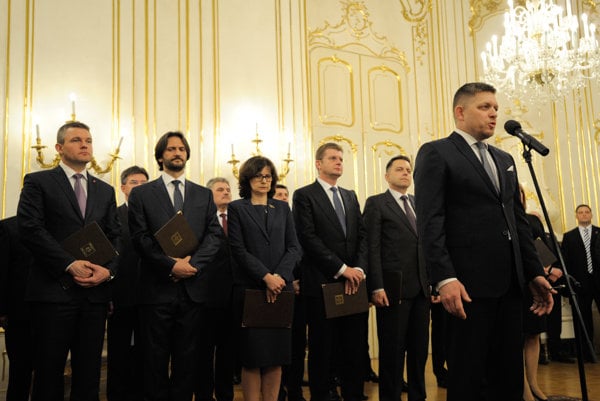 Four parties of the new ruling coalition have agreed on programme priorities that will serve for preparation of the government’s plan for its four-year term. While Smer, SNS, Most-Híd and Sieť seem satisfied, representatives of the business sector and economic analysts see the priorities as not ambitious enough. The former also calls for systemic measures to improve the business environment bringing tangible results.

“PAS calls on all ruling parties to make sure the future programme manifesto includes tangible and precisely measurable measures, not vague and general statements, whose fulfilment is a matter of discussion and point of view,” Peter Kremský, executive director of the Business Alliance of Slovakia (PAS), wrote in PAS press release. “It is especially important that measures to combat corruption and clientelism are not adopted for show, but that real pressure to clean up public life, as required by the public, begins.”

Smer, SNS, Most-Híd and Sieť agreed on March 15 on programme priorities for the new government, slated to rule through 2020. The new government has 30 days to prepare its programme manifesto, i.e. plan for its four-year term, which needs the support of at least 76 MPs.

The programme priorities include several chapters addressing the economic and social development of Slovakia. Tax-related priorities include reduction of the corporate tax by 1 percentage point to 21 percent, scrapping of tax licenses as of January 1, 2018 and increasing the cap on flat expenditures, the portion that self-employed people can deduct from their tax base without a need to keep accounting books. In fiscal policy it postponed reaching of a balanced state budget by two years to 2020 compared to the original plan and in terms of combat with corruption they agreed to adopt an effective anti-shell company law relating to all public funds. The priorities also address the dire situation of the health-care sector but also increase of the minimum wage and valorisation of old-age pensions. There is also a plan to create further 100,000 jobs and push the jobless rate below 10 percent.

All four new ruling parties showed satisfaction with points they managed to push into the final programme priorities.

“We found out [during negotiations about programme priorities] that we actually can agree upon 90 percent of our requirements,” Smer’s head Robert Fico said during a discussion programme on the TA3 news channel on March 20.

PAS hopes that the new government will prepare a programme manifesto focusing on improvement of the business environment in Slovakia. Along with the National Union of Employers (RÚZ), the PAS say the priorities lack systemic measures heading toward increasing quality of the business environment and support of the Slovakia’s industry. The latter recalled that measures like modernisation of the labour legislation, reform of the regulatory framework in the energy sector, system of education, more systemic creation of legislation or removal of bureaucratic obstacles can fundamentally contribute to strengthening of the competitiveness of Slovakia and creation of new jobs, the TASR newswire reported.

“The list of measures mixes leftist with rightist measures; in terms of the result it is has very little ambition,” INESS think tank analyst Radovan Ďurana told The Slovak Spectator.

According to Ďurana, several measures contradict one another when, for example, efforts to support the business environment would be not complete without lifting regulations on the labour market.

“We perceive positively the willingness to reduce the rate of the corporate tax, even though the decrease to 21 percent is more or less symbolic,” said Ďurana. “Cancelation of [tax] licenses should have been valid as of the first possible day; it makes no sense to postpone this to 2018.”

Martin Reguli, analyst from the F. A. Hayek Foundation, also assesses programme priorities as very weak in terms of fiscal policy and the business environment.

“While scrapping the tax licenses and reduction of the corporate tax are steps in the right direction, there is completely missing any mention about a reform of payroll taxes or making the labour code more flexible,” Reguli told The Slovak Spectator. “I evaluate negatively also the ban on privatising state assets especially because state companies would need to increase their effectiveness and this can be achieved only by privatisation linked with liberalisation of the market on which they operate.”

Analysts as well as representatives of the business sector keep reiterating the need for bigger structural reforms. Ďurana said that Slovakia needs such a business environment in order it does not need to buy investors expensively but that they arrive on their own.

“This is impossible without a radical change in bureaucratic, regulatory and tax burden,” said Ďurana. “These changes must go hand in hand with an increase in law enforceability.”

Reguli added that a structural reform must, apart from liberalisation of the market and reform of taxes and levies, include also a reform of public expenditures.

“Only after a significant reform of expenditures it is possible to reduce taxes and levies,” said Reguli. “To reduce expenditures the government should give up control of some sectors via the monopolies it holds. This should be followed also by reasonable reform of social expenditures. But we cannot count with this in case of this government.”

In general Reguli is sceptical whether this government would have enough courage to carry out these changes while the presence of centre-right parties does not make it more likely.