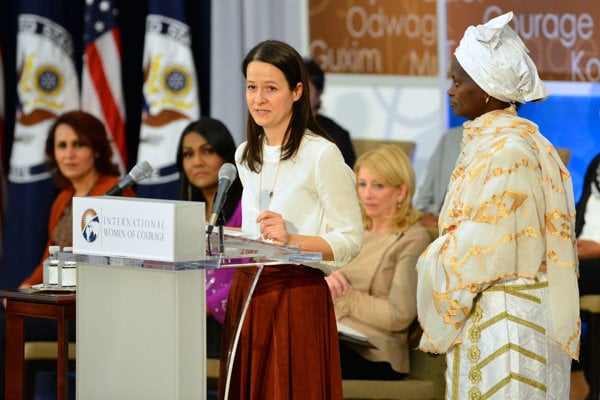 US Secretary of State John Kerry presented the 2016 Secretary of State’s International Women of Courage Award, with which he annually recognises women around the globe who have demonstrated “exceptional courage and leadership in advocating for peace, justice, human rights, gender equality and women’s empowerment, often at great personal risk”, reads the website of the US Department of State.

Attorney Števulová has emerged as the country’s most prominent advocate for refugee and migrant rights, the US Department of State informed.

“In a country where the majority of asylum applications are rejected, she has won numerous cases at Slovakia’s Supreme Court on behalf of clients in expulsion and asylum proceedings,” the department’s website reads. 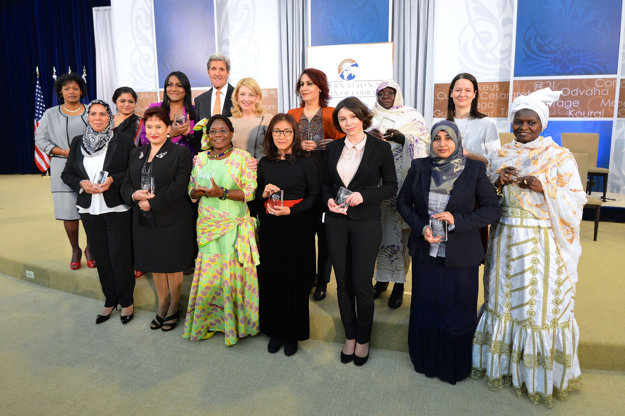 US Secretary of State John Kerry and US Ambassador-at-Large for Global Women's Issues Cathy Russell pose for a photo with the 2016 Secretary of State’s International Women of Courage Award winners at the U.S. Department of State in Washington, D.C., on March 29, 2016. (Source: State Department photo/Public Domain)

Since the start of Europe’s migration crisis, she has been a strong and unwavering voice for greater assistance to and compassion for refugees.

“She has not shied away from criticising the anti-refugee and anti-Muslim rhetoric of certain politicians and regularly challenges social prejudice and fear by introducing Slovak citizens to refugees who have successfully integrated into Slovak society,” the website states.

As opposed to the praise from the US Department of State, Števulová has faced several problems in Slovakia for her activities. Interior Minister Robert Kaliňák, for example, asked the Office of the UN High Commissioner for Refugees (UNHCR) to replace her as its representative in Slovakia, the Denník N daily reported.

He took this step following her report about police officers beating the refugees in a camp in Medveďov (Trnava Region). The USA, however, appreciates her for it, the daily wrote.

Števulová was pleased by the award and adds she has no conflict with Kaliňák. 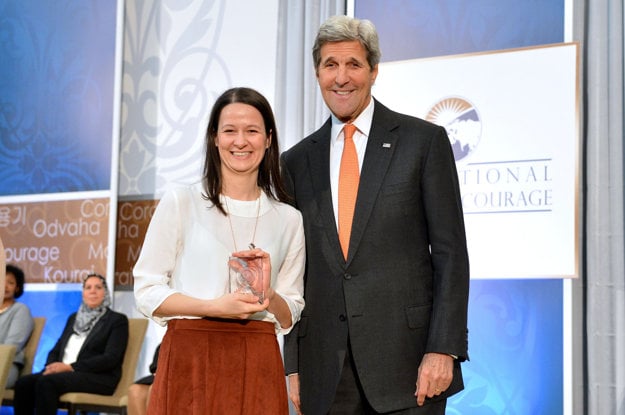 US Secretary of State John Kerry presents the 2016 International Women of Courage Award to Zuzana Števulová of Slovakia, Director of the Human Rights League, at the U.S. Department of State in Washington, D.C., on March 29, 2016. (Source: State Department photo/Public Domain)

“The award is not granted in order to become someone’s critic, but it is a reward for attitudes and systematic work with refugees and foreigners,” Števulová told Denník N.

Regarding the protection of refugees’ rights, she stressed that she and her organisation try to achieve understanding with the government, the ministries and the police, where many skilled people are working, she added.

Since the inception of this award in 2007, the Department of State has honoured nearly 100 women from 60 different countries. Among them  also Zuzana Čaputová, a lawyer cooperating with Via Iuris think tank, who received the award in 2011 and Vanda Durbáková, a lawyer from the Košice-based non-governmental Advisory Centre for Civil and Human Rights, who received it in 2013.

Among the women nominated for the award by the US Embassy in Slovakia were Zuzana Čaputová, a lawyer cooperating with Via Iuris think tank who was nominated in 2011, Vanda Durbáková, a lawyer from the Košice-based non-governmental Advisory Centre for Civil and Human Rights, and Oľga Pietruchová, an advocate of human rights equality nominated in 2014.

Števulová was the first to receive the award.

Števulová (32) was born in Martin. She graduated from the school of law at the Trnava University. She became interested in humanitarian and international law during her studies and focused on the rights of refugees. She first worked at the Slovak Helsinki Committee, which was scrapped in 2005. The lawyers, who worked for the committee, founded the Human Rights League.