What would a society ruled by the neo-Nazis be like? 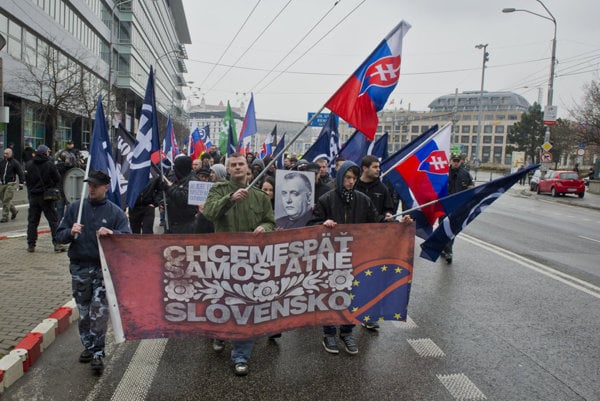 Freedom is fragile and always suffers when clashing with neo-Nazism, born from a conflict with values that a democratic society stands upon. The conflict is implacable even in the case when neo-Nazism puts on a more benign guise, and the number of frustrated people who see it as a solution grows.

We cannot put the country in the hands of those who dissolve values won by previous generations only because some politicians have been betraying the essence of public service for decades.

The fact that some first-time voters would willingly lay power in the hands of neo-Nazis, who take inspiration from the darkest time of the history of humankind, suggests that we are looking at a serious failure not only in education, but also in the historical memory of this nation.

Neo-Nazism and extremism addresses young people just like terrorists recruit new soldiers in their army. It takes care of the angry, the neglected, the disappointed, and the hungry. It offers them an easy-to-digest sense and identity that they don’t need to labouriously build through their own experiences.

Instead of telling them the truth - that some problems have no instant solutions - it offers the licence to pour one’s frustration onto the enemy, one that they select with the ease of a medieval inquisitor.

It offers liberating explanations and conspiracy theories that replace history, science, logic, mathematics, and gradually even rational thinking as such.

Rising from the ashes

Frustrated young people often claim that the society they live in is the slave of a great puppet master who has controlled the world for centuries, pulling all the strings and denying the free will of individuals.

It could be anyone pulling the strings: judeo-bolshevik and freemason lobby, Brussels, the united bankers of the western world, Rosicrucians, Khazars, George Soros and his foundations striving for world power, coffee coolers.

While conspiracy theories willingly name that enemy, the neo-Nazis serve them final and radical solutions. With great delight they consume the words about burning into ashes, hoping that those ashes will give a rise to a stronger, more vigorous, and whiter nation than the society they live in. But they alone remain slaves of their perceived “liberator” and what they really support is in fact the decline of humankind.

It is the feast of everything that humankind looks at with shame when it looks back into its past. Neo-Nazism has no benign face, it only puts on masks that sometimes blur the edges.

A society that would be ruled by a neo-Nazi

If the neo-Nazis were to fulfill the promises that they angrily shout during their brown marches, they would first get rid of all those that it calls parasites. Radically. They would probably raze to the ground the dwellings of the Roma in settlements.

Since they wouldn’t be able to give a paid job to most of them, there would be a question what to do with them. Forced labour, sterilisation, or gas? Even if all the settlements were bulldozed and all the allowances were cancelled, the quality of life of the majority wouldn’t improve.

Then it would be the turn of other minorities, expelling them or issuing fines for using a language other than Slovak. Every neo-Nazi would be able to kick and throw stones according to their liking, even into a Muslim woman with children.

They would ban theatre plays and burn books that they say support the rule of the enemy. Primitivism and brutality would be the new norm, along with uniforms, with “Slovakia for Slovaks,” and with “a nice white day”. Control and fear would surround schools, children would report their own parents to the authorities, and parents their children. The inconvenient ones would mysteriously disappear.

Neo-Nazis would gradually see that society cannot progress because terror does not endorse creativity, inventiveness, and the courage to think. And so they would turn their anger against other “parasites”.

That could be virtually anyone who wouldn’t agree with their sick opinions: people of different views, artists whose creativity is not limited to the variations of the double cross, priests of religions other than that of the state, teachers who do not agree with their interpretation of history, medical doctors who endorse vaccination.

And then, after hatred and aggressiveness turn society into ashes, the nation remains crippled and humiliated with its own evil. Until it learns. That that might take another century. But by then the nation might not exist anymore.

Some first-time voters who voted for neo-Nazis in the elections belong to a generation that does not have an authentic experience with a totalitarian regime.They are the product of an education system that apparently wasn’t able to explain and mediate this experience.

These young people could have been the generation that is free from thinking in patterns and fully understands the essence of the values that democratic societies stand upon. If only the previous governments had not underestimated the importance of education.

We have reduced many teachers to reciters of theorems within the state-approved curriculum, and we have made mediocrity an unachievable standard. We have elevated exclusion of those who stand out to the level of a state doctrine and have thrown the challenge of inclusion to the third sector to take care of.

Some people who voted for the neo-Nazis become more aggressive in discussions and use personal attacks. When they claim that they do not see neo-Nazism in a certain party, they still use the neo-Nazi party’s arguments and easily label anyone who does not agree with them as prey.

What with neo-Nazis in politics?

Our culture is based on tolerance, democracy, freedom, and personal development of an individual. Neo-Nazis shout that society it threatened and they will protect it. But they promote an ideology that denies all that they declaratively want to protect. Neo-Nazism never helped anyone, not even those who were supporting it the most. Instead, it threw entire nations into disaster.

That is why society should not allow gradual softening of the essence of neo-Nazis in politics. How will a person who attacked a Muslim family with small children and denied the Holocaust honour the Constitution of this country? How will someone propose wise laws if he considers the clero-fascist wartime state the ideal of ruling ?

It is not possible to divide these people from the essence of their messages, when they march the streets and threaten anyone they dislike for some reason: due to skin colour, faith, partner, or just a different hairstyle.

Those politicians are still wearing their imaginary uniforms under their suits and carry opinions in their heads that deny the citizens of this country their human rights.