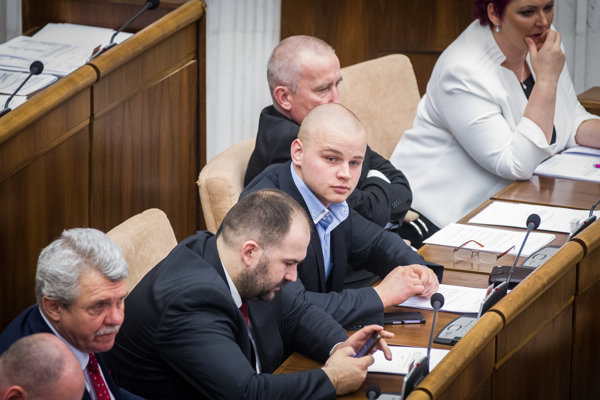 A far-right extremist, pro-life activists and a supporter of the political regime in Belarus look set to be among those dealing with the country’s human rights issues over the next four years.

Such nominations for the parliamentary committee for human rights and national minorities are drawing criticism from human rights advocates who believe that it continues to reflect the long term disinterest in human in rights issues.

“On the contrary, only politicians who want to restrict the human rights for certain groups show interest,” Martin Macko, executive director of the Initiative Inakosť non-governmental organisation, told The Slovak Spectator.

The proposed composition of the human rights committee is, however, not the only problem. Several media outlets have reported about complaints of some MPs on their placement, so the parliament promised to deal with the problem at its next session.

Marian Mesároš, executive director of the Slovak National Centre for Human Rights, says that the current makeup of the human rights committee is an important warning that observance of human rights cannot be taken for granted in central Europe, even in the 21st century.

One of the most controversial MPs nominated to the human rights committee is Milan Mazurek from People’s Party – Our Slovakia (ĽSNS) of Marian Kotleba. He gained publicity during the 2015 protest against immigration in Bratislava, when he called a Muslim family foul names. Several other extremists then attacked the family.

He has also published several posts on a social network, calling the Holocaust a fairytale. The statements will be checked by the Prosecutor General’s Office, spokeswoman Andrea Predajňová confirmed to the Aktuality.sk website.

When approached by several media, Mazurek has denied ever writing anything which would deny the Holocaust.

He, however, is not the only person who caught the attention of the human rights activists. Erika Jurinová of the Ordinary People and Independent Personalities (OĽaNO) is set to chair the committee. She was among 19 deputies who during the previous tenure supported the draft amendment proposing prison as a punishment for abortion or artificial insemination.

Her deputy, according to press reports, should become former TV presenter Martina Šimkovičová from the We Are Family party led by Boris Kollár. She was dismissed after publishing untrue statements about refugees. She also said in the past that gender ideology is part of neo-Marxism and its aim is to destroy a traditional family, Aktuality.sk reported.

Another member is Anna Verešová (OĽaNO), member of the Alliance for Family which organised the pro-family referendum in February 2015. Also Mária Janíková of Smer, who reportedly described Belarus as an inspirational country, will sit on the committee. Janíková has since disassociated herself with the statement.

Moreover, Smer nominee Ľubomír Želiezka was accused of brutal attack on a senior citizen in Bánovce nad Bebravou (Trenčín Region) in the past. The pensioner claimed that Želiezka punched him into face and he had to be hospitalised, Aktuality.sk wrote.

Irena Bihariová of the People against Racism considers the members of the committee incompetent to deal with this agenda.

“The attitudes of the members rather suggest that they have completely different information about this topic, they perceive them differently and I am afraid that this approach will be reflected in their professional work,” Bihariová told the Pravda daily.

Speaker of Parliament Andrej Danko (SNS) however says that the committees are constituted by the law, so they need to follow certain rules.

“Every parliamentary party has to nominate one member of the committee,” Danko told Aktuality.sk. “We cannot individually decide in which committees it is appropriate and in which it is not.”

Marek Rybář from the Comenius University’s school of political science confirms that every party has a certain number of members which correspond with the division of power between the coalition and the opposition in the parliament. Every party nominates the deputies, preferably based on their specialisation, but the parliament as a whole has a final word in the selection, he explained.

He also thinks that the controversial politicians, who sit in the human rights committee, would be problematic also in any other committee, but in this case it just stands out more.

The committee has never acted as some kind of parliamentary opposition or watchdog of human rights agenda and tolerance, notes Laco Oravec, programme director of the Milan Šimečka Foundation.

“We have already witnessed that it was kind of a storage room for politicians,” Oravec told The Slovak Spectator.

Among the controversial personalities on the committee in the past were three-time prime minister and former chair of the Movement for a Democratic Slovakia (HZDS) Vladimír Mečiar or ex-leader of the Slovak National Party (SNS) Ján Slota, adds Kálmán Petőcz of the Slovak Helsinki Committee. Moreover, during the last tenure one of its members was Vladimír Jánoš, who now faces charges for abusing his ex-wife.

“Human rights are not an attractive topic for many politicians or MPs,” Oravec said, “so it does not have as much prestige as the other key parliamentary committees, which is a pity.”

Rybář admits that certain committees are more preferred than the other ones, but the human rights committee does not belong to this group, as was confirmed also by one of the surveys his school carried out in the past.

“Yet this does not mean that for people in this committee it is not an important issue,” he told The Slovak Spectator.

What with the human rights agenda?

As for real results, the committee has not played an important role in the human rights agenda, and during the last tenure there was hardly any activity by its members, Macko says. It even did not adopt any stance to the most important document adopted by the previous cabinet, the national strategy for human rights, he added.

“Its invisibility and inactivity was partially replaced by activities of its chairman Rudolf Chmel, who is advocate of the universality of human rights, especially the rights of minorities,” Macko said, adding that this cannot be expected from the current chair Jurinová.

However, regarding the current members of the committee, he hopes that it will stay as invisible and unimportant as in the past.

Rybář says that the impact of the parliamentary committees and their work on parliament’s decision-making is not big under the Slovak conditions, unlike in the United States or the European Parliament where the committees’ statements are binding for the whole parliament. The most important is affiliation to the political parties, which is also reflected in voting of the committees’ members, he explained.

“They however have an important function: they are certain tool of the opposition to control the government,” Rybář said.

Though some committee members deal with human rights, the fact is that they focus only on certain segments, Petőcz says.

Members of parliamentary committees should have certain knowledge about the human rights agenda as they discuss and decide on the draft laws, Bihariová says.

“I think that at least for the next four years this topic will be completely static in Slovakia,” she told Pravda.