In public rail transport a certain scope of regulation as well as liberalisation is needed. 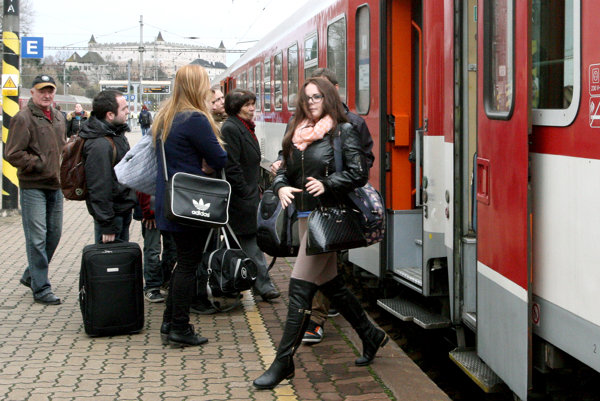 PRIVATE rail carriers have begun offering new services and lower fares. But while the state claims that it wants to liberalise the sector even more, protectionist measures for the state carrier are slowing growth for private operators.

“In public rail transport a certain scope of regulation as well as liberalisation is needed,” Desana Mertinková, editor-in-chief of the Železničná Revue magazine, told The Slovak Spectator. “Without the first one it is impossible, for example, to keep network-wide transport services or fares. Without the second one the pressure to increase the quality of services and reduce operating costs is lacking.”

In Slovakia subsidised passenger rail transport carried out by private carriers accounts for just 3 percent of the total, compared with about 25 percent in Germany. The entry of a private carrier on the 230-km Bratislava to Banská Bystrica route would boost that to 4-5 percent, according to Mertinková.

The Transport Ministry wants more private carriers, but only in the system with a completely interconnected timetable of long-distance, inter-regional and suburban railways.

However, RegioJet, a private company, accuses the state of warping the liberalised environment via free trains for selected groups of passengers, weak progress in competitions and interference in transport markets.

“The government is trying to create some national carriers,” RegioJet spokesman Aleš Ondrůj told The Slovak Spectator. “That will bring a tremendous burden for taxpayers and more warping of the markets.”

In terms of liberalisation, Ľubomír Palčák of the Research Institute of Transport (VÚD) sees a difference between subsidised transportation and commercial carriers that take business risks. Real liberalisation pertains only to the latter, he said.

Mertinková believes that because of the lack of room private carriers have in subsidised transport, they try to establish themselves in commercial rail transport, even though the state has created the worst conditions within the European Union. She points to the launch of free train transport for students and pensioners on subsidised trains. As a consequence RegioJet has lost one half of its potential passengers on the Bratislava-Košice route.

The international line between Prague and Košice is handled by RegioJet, Pendolino of the Czech state-owned company České dráhy and Leo Express, which recently responded to an increase in passengers by adding two other trains.

“Passengers can travel in both directions with us twice a day, morning and evening,” Petra Valentová, head of marketing of Leo Express, told The Slovak Spectator.

Prague is also linked with Trenčín as of early March thanks to Arriva trains owned by Deutsche Bahn. A couple of trains travel from Prague through Olomouc, Uherské Hradiště and Vlársky priesmyk mountain pass on Saturday morning and back on Sunday afternoon.

Arriva has introduced to Považie region a comfortable connection by train with the capital and university cities in Czech Republic, according to László Ivan, managing director for Slovakia of Arriva.

“Travelling by bus on reconstructed Czech highway D1 is like a bet in roulette – sometimes you go without a problem, other times you stand for dozens of minutes in traffic jams,” Ivan told The Slovak Spectator.

Other options come with a tender for subsidised railway linking Bratislava with Banská Bystrica announced in the fall, which could include all private companies operating on the market as well as to state companies ZSSK, České dráhy and Austria’s ÖBB. The Transport Ministry is assessing competitive biddings, Kóňa said.

Palčák emphasised that the whole network would be more liberalised from the end of 2019 thanks to the planned fourth railway package.

“All carriers should be able to offer competitive services or services in the public interest via public procurement,” Palčák said.

End of the InterCity era

The fight for customers between ZSSK and RegioJet on the main linkage Bratislava to Košice erupted into cancellation of commercial but state-owned InterCity (IC) trains. Such routes have reportedly lost some €3.5 million since their introduction.

“Streams of travellers between the two largest cities do not allow reliable nor sustainable existence of a commercial train in a sparsely populated country,” said Kóňa.

Mertinková said that IC trains run on a commercial risk because of the unwillingness to subsidise more lines.

“The government followed entry of RegioJet by a number of measures to protect its business,” Mertinková said, “this created the worst conditions in the European Union for commercial business.”

The ministry, in cooperation with ZSSK, responded by strengthening selected express trains on the strongest days of the week, said Kóňa.

Palčák pointed to lower capacity of RegioJet trains by about a thousand seats.

“Despite the existence of long-distance and regional express trains by ZSSK, there could be seen a certain fall in quality of transportation from the perspective of supply,” Palčák said.

Though RegioJet would like to expand its trains serving peak periods to up to 13 carriages, passengers so far can only use 10 carriages.

“Railway operator ŽSR is blocking access to a platform in Bratislava which allows such long trains,” wrote Radim Jančura, RegioJet director, in a press release.

“We sell tickets in three price categories depending on the utilisation of the line,” wrote Jančura.

In the future, IC trains may come back under certain circumstances, according to Kóňa.

“Each carrier has the responsibility to provide and improve its services to the travelling public,” Kóňa said.

In these terms, Ondrůj pointed out that state-owned commercial trains must make money on their own, cannot be cross-financed by subsidised trains and cannot harm other carriers by price dumping – or operating at a loss to drive competition out of business.

These legal policies are valid anywhere in the European Union and cannot be modified in any way, Ondrůj said.

Mertinková stressed that cancellation and restoration of IC trains will not solve anything, adding that “it is essential to set clear and fair rules that will not benefit any particular carrier and will not change whenever it is convenient for politicians or state business”.

ZSSK carried more than 57 million passengers in 2015, an increase of about 21 percent from 2014. Some 42.9 percent travelled free of charge. Similarly, a number of passengers who used the subsidised Bratislava to Komárno line operated by RegioJet rose by 32 percent to 2.43 million, according to VÚD statistics.

“The significant increase in customers probably relates to free tickets for students and pensioners,” Palčák said.

In terms of increased interest in rail transport, Palčák suggests raising capacity, having more convenient scheduling on selected sections and a guaranteed interconnection time of trains of higher and lower categories.

“The time position must respect real needs of customers including accuracy, reliability and, last but not least, cleanliness,” Palčák said.