Senec’s outlet will change to offices

What was projected as a first outlet centre in Slovakia will turn into offices and showrooms. 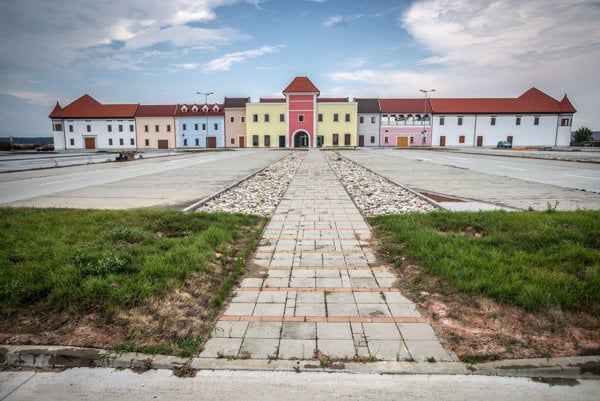 The developer of the D1 Outlet City project, company Ipec Group, has changed the original function of the buildings, which will be now used by Chinese firms. Also the name will change to D1 Expo Business Centre, the Hospodárske Noviny daily reported.

“The object will not be used for sales to end consumers, but it will serve as a wholesale and promotion centre for companies,” said Ivan Čarnogurský, head of Ipec Group, as quoted by Hospodárske Noviny.

The company has already introduced the investor of the project, Chinese industrial group Jiangsu Weitian Chemical Group, which has put €10 million into the new business centre.

Though it is empty now, Čarnogurský says they have already signed agreement with 30 firms. Among the first tenants will be wholesalers with construction technologies, bulbs, in-line skates, and water pumps and cleaners. Most of them will use the nearby warehouses, according to the press release.

“We are preparing 80 administrative units for our partners in D1 Expo Business Centre,” Čarnogurský said, adding that they can establish here their central European or European administrative headquarters.

The new strategy is based on the fact that Chinese companies that enter the European market do not want to rely only on distributors. They want to be present in the country, rent new spaces and deal with distribution.

“They want to do business under their own name,” Ján Janek of Eusahub company, which cooperates in the project, told Hospodárske Noviny.

Jiangsu Weitian Chemical Group chose Senec mostly due to Slovakia’s membership in the European Union and the eurozone, as well as its connection to crucial western and central European markets.

“The D1 Expo Business Centre is interesting for its effort to bring non-European companies under one roof, where they can share their experiences and knowledge from the European market,” said Lin Shengqin, CEO and co-owner of Jiangsu Weitian Chemical Group, as quoted in the press release.

She added that the D1 Park has possibilities for further growth.

The developer originally introduced the project under the name D1 Outlet City seven years ago. Since then it has changed the date of opening several times, and even lost its fight with another outlet centre near Voderady (close to Trnava) which opened in 2013.

It has also faced financial problems and struggled to attract some tenants. Thus analysts perceive the change from outlet centre to administrative and logistics base for Asian investors as logical. It is possible that another outlet close to Bratislava would not be successful as also the outlet centre in Voderady has problems with visitors, Hospodárske Noviny wrote.