New ministers have given their drafts of programme priorities to Prime Minister Robert Fico, to be discussed by the government, on April 6. 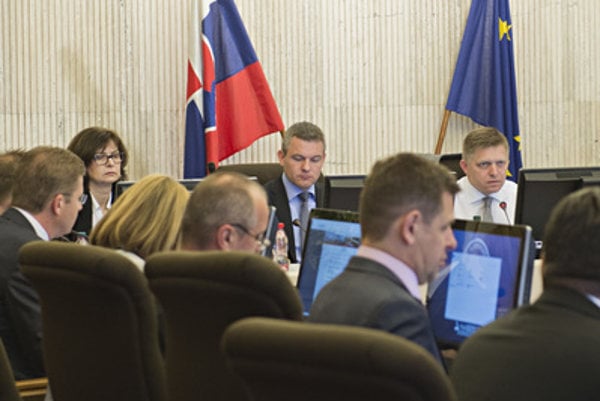 However they did not want to present them more in detail for the moment. These are just drafts, and comments and criticism are still to be collected, Interior Minister and Deputy Prime Minister Robert Kaliňák said, as quoted by the SITA newsire. “We still need to put them into a form that can find general support in coalition and in parliament,” Kaliňák explained.

Fico will present the finalised document for approval at a government session on April 13. At that time, the government will bring the programme statement before parliament and win the trust of MPs. Kaliňák, on behalf of his ministry, said that they will face challenges in the fight against organised crime and illegal migration; and in cooperation with the Justice Ministry, issues concerning the fight against corruption and diminishing the space for corruption will be solved.

Some ministries have not yet concluded negotiations with their social partners, e.g. the Health Ministry, as the new minister Tomáš Drucker informed the TASR newswire. Foreign Minister Miroslav Lajčák said his ministry’s programme priorities were about fine-tuning rather than about setting anew. He also specified that for him, increasing the volume of resources heading for Slovakia’s development aid in the next years is crucial; to reflect the fact that structure of the Slovak expat community has changed, that there are many young people with families and children, eager to preserve their language. Thus, the traditional expat policy is not adequate to what is needed, he summed up.

Justice Minister Lucia Žitňanská stated that increasing the trustworthiness and effectiveness of judiciary is a priority; while Defence Minister Peter Gajdoš deems the improvment of Slovakia’s security defence as crucial. The main task for the Environment Ministry is development of a low-carbon economy, minister László Solymos told TASR