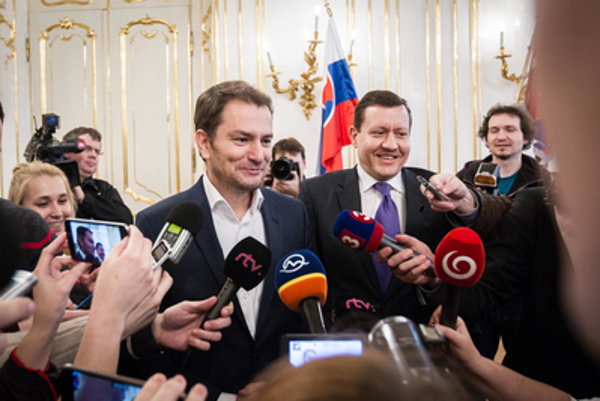 The duo (both Ordinary People and Independent Personalities-OĽaNO-NOVA) cites inaction of law enforcement in cases of political corruption as the reason behind the initiative. “There are a myriad of cases and they’re easy to document, yet the bodies fail to take action,” Lipšic said, as quoted by the TASR newswire. “Such investigative committees exist also in other countries and are empowered to summon witnesses – who must come and testify under oath. The findings of the committees can be used in an official investigation. The committees cannot press charges or issue verdicts, but they can open the case and engage in real investigations.” Lipšic added that a minimum of 50 MPs would be required to initiate a specific committee hearing – with coalition and opposition equally represented.

Lipšic announced the intention to submit the amendment in the wake of a letter from a former employee of the Financial Administration sent to a number of media outlets on April 6. The letter details the inaction of law enforcement bodies in the case of allegedly unwarranted VAT refund paid to entrepreneur Ladislav Bašternák who rents Prime Minister Robert Fico his flat.

“NAKA was investigating the report of the Financial Administration (FS), which claimed that a tax evasion worth €2 million took place,” Lipšic, the former justice and interior minister, said. “NAKA rejected this. A standard approach is for the state, represented by FS, to file a complaint against such a decision. However, FS has never done so.”

The letter also allegedly talks about two female employees pressured by FS management to sweep the case under the carpet, and when they complied, they were rewarded with job promotions. These circumstances only work to corroborate the suspicion that the entire case has been consistently covered up and this is condoned and organised by FS, NAKA executives, as well as the Special Prosecutor’s Office, according to Lipšic.

OĽaNO-NOVA leader Igor Matovič called upon Fico to terminate instantly his rental of the flat belonging to Bašternák. “If he fails to do so, he will corroborate the behind-the-scenes information that the flat is in reality his own and he received it for covering up these frauds,” Matovič said. “There’s no democratic country on the planet where the prime minister or any senior politician would voluntarily live in a flat of a person who built it from money stolen from taxpayers.”

Police officials are asking lawmakers Lipšic and Matovič to stop slandering the work of the National Criminal Agency (NAKA) investigators in an aim to grab some media attention, TASR learnt on the same day.

“Every case is being properly investigated by the police and action is being taken,” the police press release states. “In recent years, NAKA has charged dozens of people with corruption, the failure to perform duties regarding the administration of entrusted property, public tender manipulation and damaging the financial interests of Europe...among the accused are three former ministers, eight judges, nine prosecutors, 23 mayors, ten municipal councillors, 33 doctors and 10 university educators.” As part of the Cobra anti-tax fraud operation, NAKA officers saved the state almost €54 million in identifying unwarranted VAT refunds and dealt with cases that could cause damage worth €289 million, according to the Police Corps Presidium.

The Financial Administration (FS) is not covering up any tax frauds, FS President Frantisek Imrecze reacted on April 6. “I believe that the driving force behind this campaign against FS is the fact that it’s highly inconvenient for someone to see us investigate the dealings of “VAT-ers”. We have waged a very active and intense fight against tax fraud for four years,” he said for TASR. “The anonymous letter, allegedly written by our former employee, contains a lot of false information. For instance, the statement that (FS Tax and Customs Department general director) Daniel Čech influenced the course of a tax audit is absurd and a lie because he joined the FS on June 15, 2012. However, the tax audit protocol, as presented to the media, was signed three days prior to that.”

His tenure at FS started on May 9, 2012, Imrecze pointed out. “The published audit in question began two years after my joining FS, which was in turmoil back then,” he said. “I’ve never met the FS auditors who carried out the audit and have never discussed the case with them. Also, I’ve never given any written nor oral instruction or guidance to anyone as to how to proceed during the realisation of the audit. And this holds true for any audit carried out by FS under my tenure.” Imrecze added he will make sure that all suspicions are thoroughly investigated; and he fully stands behind his people.