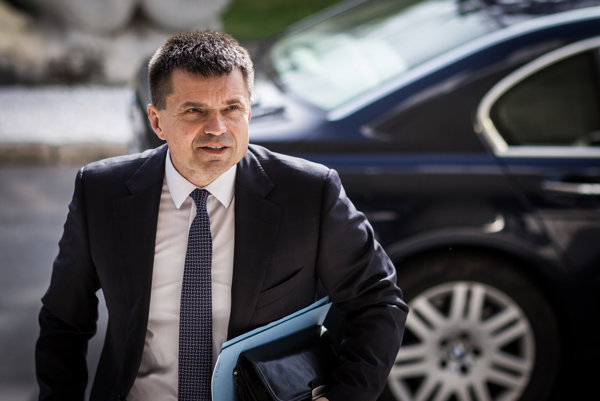 Even as parliament has yet to express confidence to the new government, one of its ministers is already facing a proposal to force him out of his post.

Independent MP Miroslav Beblavý pointed to questionable activities by the Student Credit Fund (ŠPF) and Credit Fund for New Teachers (PFZP) when Peter Plavčan, current education minister nominated by the Slovak National Party (SNS), served on its controlling bodies. He described the new minister as “an eminence grise” who was to secure nobody would interfere with the fund’s affairs.

As a result, Beblavý and Veronika Remišová (Ordinary People and Independent Personalities-NOVA), are calling for the minister’s ouster. Plavčan, however, rejects the accusations, claiming that the police and prosecutors have described them as unfounded. He also does not want to deal with the claim, as he prepares the biggest reform in education in past 25 years.

SNS chair Andrej Danko and Prime Minister Robert Fico now have two weeks to replace the minister. If they fail to do so until the session at which the parliament will discuss the government manifesto, the MPs will start collecting signatures for Plavčan’s dismissal, SITA wrote.

Erik Láštic of the Comenius University’s school of political science admits that it is not common to dismiss the minister before the government receives a vote of confidence from the parliament. The law however does not ban it as both the government and the parliament already fulfil their tasks arising from the law. Somebody, however, could object to such a step, saying that the government needs to have confidence, he told The Slovak Spectator.

Among the biggest scandals to which Beblavý pointed on his blog was the loan amounting to €5.5 million to Slavia Capital investment group, without any selection procedure or real guarantees. At the time, Plavčan served as chair of the ŠPF Council. During the following years he also served as chair of the supervisory board. Moreover, a member of the board of directors in Slavia Capital was Plavčan’s wife, Viera Plavčanová.

“This loan was at clear odds with the law, which allows the Fund to hold free resources only in bank accounts,” Beblavý said, as quoted by the TASR newswire.

He also pointed at the interest rate, which was much lower than the rate offered by the banks. As a result, the ŠPF gave thousands of euros a year to Slavia Capital, according to Beblavý.

The loan was paid off only after Plavčan and then head of the ŠPF Ľubomír Zburín left their posts.

Slavia Capital, however, objected to the claims.

“The aforementioned short-term investment in the form of a promissory note ensured a beneficial evaluation of ŠPF’s funds, with ŠPF making profit from the transaction,” the company’s spokesman Peter Benčurik told TASR.

The promissory note deal was launched on April 16, 2008 and was concluded by a complete settlement on November 30, 2011, he added.

The interest rate oscillated between 5.5 and 8 percent, depending on the length of the investments, while the interest rate with agreed maturity of one year was oscillating between 0.71 and 0.95 percent in 2010, Benčurik continued, referring to the data of the National Bank of Slovakia.

This was, however, not the only problem. The ŠPF, together with PFZP, established in 2002 on similar principles, failed to publish contracts and commissions, even though they were obliged to do so by law. Both funds also bought overpriced services on several occasions, Beblavý claimed.

In addition, members of boards at the two funds decided they should receive financial rewards despite the fact that the relevant law stipulated the posts were honorary and that these people could claim only for reimbursing their travel costs. Plavčan himself thus received almost €40,000.

Moreover, unlike other public institutions, the operation of ŠPF was not controlled by the ministries or the Supreme Audit Office, but rather its own council and the supervisory board. The members of both bodies were nominated by the education minister and representatives of students. Though Plavčan served as chair of both the ŠPF board and ŠPF supervisory board, he did not intervene, Beblavý claimed.

“All the accusations published on the blog were part of a motion filed five years ago,” Plavčan responded to the accusations, as quoted by TASR, adding that both the police and the courts found them unfounded.

As for the rewards, Plavčan claimed that he returned the money. Beblavý however pointed out that this happened only after the issue had been brought to light.

Plavčan added that he does not want to respond to the blog posts of an MP who is trying to promote himself.

“My fundamental task is drawing up the education part of the new government manifesto and carrying out the largest education reform in the past 25 years,” Plavčan said.

The dubious practices at the funds, however, have been confirmed also by representatives of the non-governmental organisations who replaced Plavčan and other members of the controlling bodies at their posts in 2010. This included Zuzana Dančíková and Peter Goliaš of the Institute for Economic and Social Reforms (INEKO) think tank, Štefan Kišš of the Institute of Financial Policy (IFP), Andrej Salner of the Slovak Governance Institute (SGI) and Gabriel Šípoš of ethics watchdog Transparency International Slovensko (TIS).

“It was absolutely absurd,” Salner told Sme, adding that the fund management obviously did not know about its duties and that it allegedly exposed the fund to great risk.

Goliaš confirmed to The Slovak Spectator that he has negative experience with Plavčan, pointing to the steps they had to adopt to make the fund work more effectively.

Šípoš opined for the Denník N daily that Plavčan’s behaviour “disqualifies him from any top position in state administration, not to mention the minister’s post”.

Plavčan meanwhile started preparing the government manifesto for education. As was promised before the elections, he invited the representatives of trade unions and teachers who had organised the strike and several protests earlier in the year.

“We welcome that he has invited partners from school environment,” Vladimír Crmoman, president of the Slovak Chamber of Teachers, told The Slovak Spectator.

Though the first draft of priorities for the education system, obtained by Denník N, talks about hiking the salaries and increasing funds for education, it does not contain any specific sums or promises. It also does not describe any vision or reforms, though the ministry claims it is necessary to carry out changes, the daily wrote.

The document also contains all three conditions set by the Initiative of Slovak Teachers, the main organiser of the teachers’ strike, i.e. the hike in salaries by €140 this year and further €90 next year, the allocation of €400 million into the sector, and changes to credit system.

The ministry’s proposal, however, lacks any numbers and it is not clear whether the ministry will accept the numbers, Denník N wrote.

The current scandal concerning Plavčan’s activities in ŠPF and his performance at the Education Ministry, where he was responsible for universities and colleges agenda, indicate that nothing fundamental will change, Juraj Halas of the Initiative of University Teachers told The Slovak Spectator.