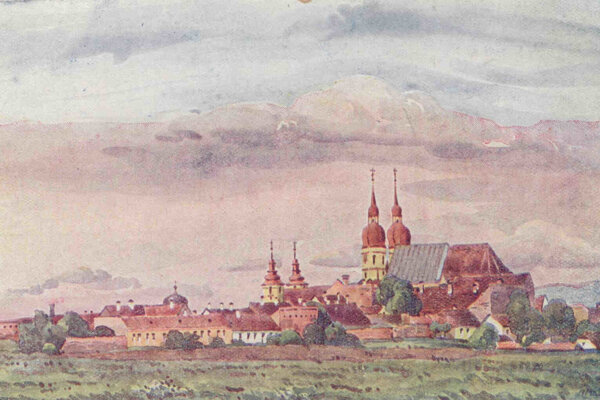 Their author was Czech painter and teacher Antonín Krátký, who worked as a teacher of painting at pedagogical institute in Modra. This postcard captures the vista of Trnava from sites which today are filled with buildings and developed. Then, only vast pastures lay here.

In the postcard, we can see that the town was still imprisoned behind city walls, and it could not – at least from the side – expand beyond. This was basically the state from the Middle Ages; the Trnava fortification started to be built as early as 1271, and was finished in the course of the 14th century.

Then, two important roads ran through Trnava: the Bratislava one, and the Czech one. People coming to Trnava via the Bratislava road entered the town through the Stulpucher Gate and left through the Lantenberg Gate. Those who took the Czech road, used the Malženice and Lovčice gates. Apart from big gates, builders also built in two smaller gates for pedestrians. For the purpose of reinforcement, they also included several towers and bastions in the fortification. One of them can be seen in this picture, lying in the very middle and hidden behind trees.

As in other towns and cities, the Trnava city walls had a sad fate; gradually, they started hampering the development and construction boom of the city, and thus they started to be demolished. In 1820, the Stulpucher and Lantenberg gates were pulled down and later, also other parts of the fortification fell victim to the expanding city.

According to the remaining walls, the medieval extent of the city can still be seen.