Teachers are ready to return to streets and squares after the government indicated it would not deliver on their demands in the coming four years. Yet protesting teachers are not the only problem of the new education minister, who has been facing calls for his resignation since his early days in office.

Education Minister Peter Plavčan was accused of breaking several laws when serving in the controlling bodies of the Student Credit Fund (ŠPF) and Credit Fund for New Teachers (PFZP). Plavčan, a nominee of the Slovak National Party (SNS), continues enjoying the trust of the party. He dismissed all the criticism, saying he was busy preparing the government’s programme statement for his department that should introduce what he called “the largest education reform in the past 25 years”.

The programme statement the government adopted on April 13, however, lags behind the expectations of teachers who organised several protests before the elections and the proposed 6-percent hike in salaries is far less than what they have been asking for. Teachers say they are ready to protest. 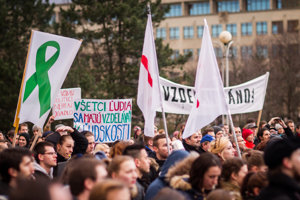 “Numbers that would make sense for the theoretical line we helped create are completely different,” Stanislav Boledovič of the A Dosť initiative told the Sme daily.

More money for education and higher salaries for teachers were among the main demands of teachers during their strike before the elections. The government plans to increase money to be spent on education to reach €2 billion over the next four years, through a regular annual increase in expenditure. The government repeatedly pledges to pour “sufficient financial resources” into the education sector with the condition that they will be used effectively.

Unions’ leader Pavel Ondek labelled the €2 billion a disappointing figure since it also includes resources from the EU funds.

“It sounds attractive, but it does not correspond with the increase of salaries,” he told Sme.

The proposed tariff salary increase for teachers does not match their demands either. It should go up by 6 percent as of September 1, 2016, and then by 6 percent every year starting January 1, 2018, according to the programme statement.

Before the elections, representatives of protesting teachers of the Initiative of Slovak Teachers (ISU) and the Slovak Teachers Chamber (SKU) demanded an increase this year in monthly salary of €140 for all teaching and professional employees in regional education facilities and €90 in monthly salary at the beginning of 2017. The 6-percent increase hardly comes close to that. For a teacher with an average salary of €760 it represents about €50.

Besides raising salaries, the programme statement also looks to “increase the attractiveness of the teaching profession” by securing a “proper work environment” and supporting “increasing the quality of [teachers’] work”.

Teachers are unhappy with the promised 6-percent annual increase in salaries, especially given the fact that two coalition parties (Most-Híd and Sieť) before the elections signed the commitment to increase salaries by 40-50 percent in the Memorandum for Better Education and Future of Slovakia.

Representatives of the ISU, who organised the strike before elections earlier this year, did not rule out continuing the strike.

Plavčan meanwhile faces calls for his dismissal due to his conduct in his earlier career at the ministry. MP Miroslav Beblavý, who informed about Plavčan’s dubious activities on his blog in early April, called on both SNS and PM Robert Fico to replace him.

“It is not a custom that the minister leaves before he spends some time in the office, but it also is not a custom that a discredited person, who abuses his post to enrich his or her family, becomes a minister,” Beblavý told the press on April 6, as quoted by the SITA newswire.

Erik Láštic of the Comenius University’s school of political science admits that it is not common to dismiss the minister before the government receives a vote of confidence from the parliament. The law, however, does not ban it as both the government and the parliament already fulfil their tasks arising from the law, he told The Slovak Spectator.

The parliament is expected to start talking about the programme statement on April 18 and express confidence in the government subsequently.

Beblavý’s accusation against Plavčan is that he acted as “an eminence grise” who was to secure nobody would interfere with the fund’s affairs.

Among the biggest scandal to which the MP pointed was a loan amounting to €5.5 million to Slavia Capital investment group, provided without any selection procedure or real guarantees. At the time, Plavčan served as chair of the ŠPF Council. During the following years he also served as chair of the supervisory board. Moreover, a member of the board of directors in Slavia Capital was Plavčan’s wife, Viera Plavčanová.

“This loan was clearly at odds with the law, which allows the fund to hold free resources only in bank accounts,” Beblavý said, as quoted by the TASR newswire and claimed that he “could not assume he was doing something standard”.

He also pointed out the interest rate, which was much lower than rates offered by banks.

In addition, the ŠPF, together with PFZP, failed to publish contracts and commissions, even though they were obliged to do so by law. Both funds also paid for overpriced services on several occasions, Beblavý claimed.

Members of boards at the two funds also decided they should receive financial rewards despite the fact that the relevant law stipulated the posts were honorary. Plavčan himself thus received almost €40,000, the most among other funds’ employees.

Plavčan, however, has rejected the accusations, calling them “void and full of misleading information”.

Plavčan also claimed that the police and prosecutors have described the accusations, which were part of the motion submitted five years ago, as unfounded, as reported by TASR.

The minister also explained in the official statement that all financial transactions in the funds had been carried out in accordance with the law. As for the bonuses, Plavčan claimed that he returned the money. Beblavý, however, pointed out that this happened only after the issue had been brought to light.

SNS spokeswoman Zuzana Kohútková told the Aktuality.sk website that they will not comment on “unfounded PR communications of Beblavý”.

“If the minister continues in education reforms in an arranged way, he has SNS’ support,” Kohútková said, as quoted by Aktuality.sk.

Slavia Capital, meanwhile, also objected to Beblavý’s claims and stated that the investment “ensured a beneficial evaluation of ŠPF’s funds”, as quoted by TASR.

On the other hand, several representatives of the non-governmental organisations who replaced Plavčan and other members of the controlling bodies at their posts in 2010 have confirmed the dubious practices.

“It was absolutely absurd,” Andrej Salner of the Slovak Governance Institute (SGI) told the Sme daily, adding that the fund management obviously did not know about its duties and that it allegedly exposed the fund to great risk.

Gabriel Šípoš of Transparency International Slovensko (TIS) opined for the Denník N daily that Plavčan’s behaviour “disqualifies him from any top position in state administration, not to mention the minister’s post”.