Former US secretary of state Madeleine Albright received the Czech and Slovak Transatlantic Award at the GLOBSEC 2016 international security forum in Bratislava on April 16. 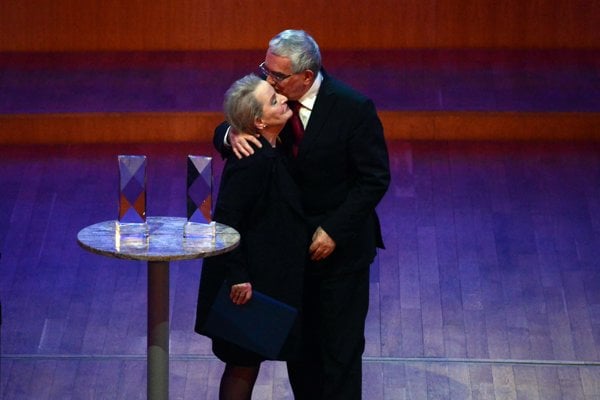 The award, given every year to two laureates who made significant contributions to the bolstering of trans-Atlantic ties, peace, prosperity and stability, will also be bestowed on Czech diplomat and politician Michael Žantovský.

“During her career, Madeleine Albright actively supported the process of democratisation and the building of freedom and stability in central Europe,” Milan Solár of the Slovak Atlantic Commission told the TASR newswire. He added that the former US secretary of state also actively contributed to the integration of former Eastern-bloc countries to NATO. Žantovský was one of the key figures of the 1989 Velvet Revolution, according to Solár.

“It is a miracle personalised in a human whose family suffered so much,” said ex-Slovak ambassador to the US Martin Bútora shortly before he awarded Albright, who in her speech she said she is proud of her Czechoslovak origin.

The USA must continue to be involved in the process of tackling issues of today’s globalised world, Albright said, as quoted by TASR. “My lifelong opinions are based on the premise that the United States must be involved,” she said. Following the wars in Iraq and Afghanistan, the American public is feeling a certain amount of exhaustion, with voices speaking in favour of isolationism growing. However, the United States must not forget about its international responsibility, said Albright, who added that America does not have to shoulder this responsibility alone but rather in cooperation with allies. She considers the calls to wind down the trans-Atlantic partnership or even disassemble NATO quite dangerous. Albright also stressed that despite the USA’s proclaimed “pivot to Asia”, Washington is not leaving Europe and still considers its security as important. 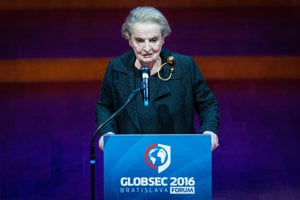 As for the current situation in Europe, Albright voiced her concern over the rise of xenophobia and nationalism, even though she conceded that a similar trend is discernible also in the US. Patriotism is one thing; nationalism, however, is very dangerous, especially when it leads to hatred, Albright said, as quoted by the Sme daily.

She also spoke about growing populism and extremism, which make many people in central and eastern Europe blind. According to her, freedom will always have enemies and evil has many forms, from nationalists to the Islamic State. We should stop speaking about the refugee crisis, as it indicates it will end shortly, but it is not going to stop, the former state secretary added. She delivered her speech before an audience including Slovak MFA Miroslav Lajčák and US Senator Christopher Murphy.

It is not true that President Barack Obama ignores central Europe or Europe in general, Albright also said in her address. Central Europe once was considered a problem, but now it is somewhere else and can be part of the solution of problems of others. Obama has worked with Europe and he believes it is important to have a strong and equal partner, Albright stated as quoted by the SITA newswire.

Albright, born in Prague, was one year old when her family fled Nazis from Czechoslovakia. She served as the US secretary of state in 1997-2001 in the second administration of Democrat president Bill Clinton.