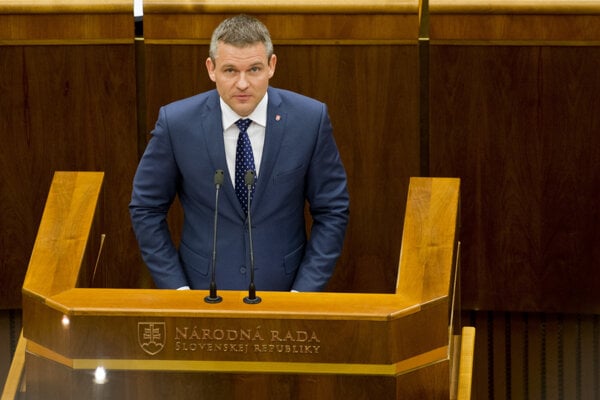 We live in a time of growing security risks, mass migration and economic turbulence, so it was important to create a stable government that would assume responsibility for Slovakia, vice prime minister for investments Peter Pellegrini (Smer) said when presenting the government manifesto in parliament on April 18. Pellegrini was acting on behalf of Prime Minister Robert Fico, who remains in hospital allegedly due to a clogged blood vessel.

“The government manifesto is committed to European democratic traditions of freedom, human dignity and tolerance,” said Pellegrini as cited by the TASR newswire. “A significant role is being played by the fight against fascist ideologies and all other forms of extremism. The manifesto is a product of collaborative mature political culture that we want to continue applying.”

Pellegrini noted that it was important to form a government with members who would prefer the future of our country to their particular political principles and squabble.

“Representatives of stable and standard parties were aware that only mature politics can unite rightist and leftist parties and those preferentially oriented on ethnically minded voters,” said Pellegrini. “This is a government of a unique and historic state agreement.”

After Pellergini introduced the programme statements in parliament, the session should be suspended and the document should be discussed within individual parliamentary committees. A parliamentary debate on it will start on April 19. It is expected to take several days and be followed by a vote of confidence in the form of the government manifesto’s approval. The ruling coalition needs at least 76 votes for the approval. The four ruling parties have 81 votes in total.

The cabinet’s programme for its four-year term approved by the cabinet last week puts accent on four broad priorities, including the fight against unemployment, regional disparities and corruption, and introduction of policies ushering in a functioning state. Among its objectives is to create 100,000 new jobs and cut the unemployment rate to under 10 percent.

The second broad priority concerns regional disparities, according to Fico.

Also, the four-member governing coalition has pledged to narrow the scope for corruption and non-transparent behaviour.

“We’re interested in adopting an even more efficient law on shell companies,” said Fico. “Furthermore, we’ve committed to transmit the entire Rule of Law initiative as presented by employers into the manifesto and into an action plan. We want to consistently apply the principles of open government – with the government becoming even more open to public scrutiny and public access to information.”

The fourth area is a functioning state.

“Here we’ve focused mainly on education and health care,” said Fico. “And, as we’re building on excellent economic and financial results of this country, I hereby announce that we have the ambition to put a total of €2 billion more into the Slovak education system in 2016-20,” said Fico.