The campaign run by a non-governmental organisation points to abuse of women’s bodies in advertisements. 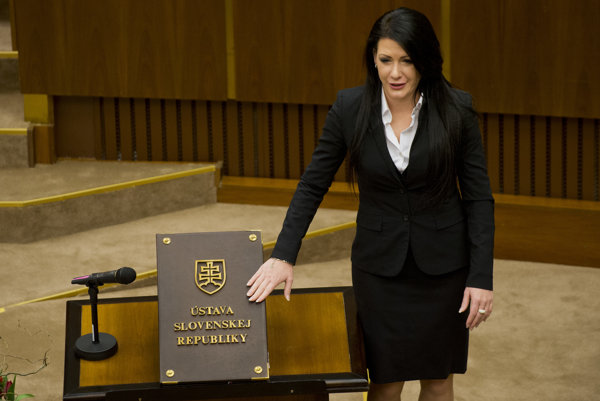 MP for Freedom and Solidarity (SaS) Jana Cigániková was granted an anti-award for the sexiest ad of the year for one of the posters she used in her pre-election campaign. The award is granted by a branch of non-governmental organisation Women’s Alliance, which fights for protection of women’s rights, as part of its Sexist Slip campaign.

“I can hardly say I am pleased by this award,” Cigániková said, as quoted by the SITA newswire, stressing that she does not consider the campaign sexist.

She added she only used it at her blog when promoting SaS’s solutions to remove obstacles in business-making.

“When I only wrote it, it had no response, thus I decided to solve it this way,” Cigániková said, as quoted by SITA.

The winner was picked by an expert committee and the public, which could vote for it between March and early April.

“There were 32 ads of which most of them depicted bare women’s bodies,” said Diana Gregorová, co-organiser of the Sexist Slip campaign, as quoted by SITA. She added that also two political ads and three ads with language sexism were nominated.

The whole campaign was launched to point to the problem of sexism in advertisements and point to its impact on the real lives of people, especially women. It should also offer a tool to the public to express their disagreement with sexism in ads. The campaign’s organisers define a sexist ad as a commercial which satirises or belittles people based on their gender, especially by depicting stereotypes and abusing mostly women’s bodies to attract attention, SITA wrote.