RegioJet to connect Bratislava and Prague

However the firm has refused to confirm the information.

Czech passenger train operator RegioJet plans to operate a pair of trains on the Prague - Brno - Bratislava track from December, 2016.

Spokesperson for the railway infrastructure operator ŽSR Martina Pavliková confirmed the information which was published by the Sme daily on April 20. 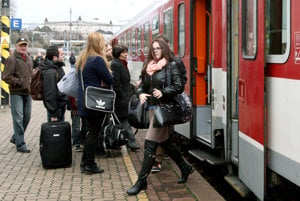 However a spokesperson for RegioJet, Aleš Ondrůj, declined to comment.

“For the time being, we will not comment on the information about the operation of our trains from December 2016,” Ondrůj said, as quoted by TASR. “We will introduce new routes in the upcoming period.”

The reason behind the carrier’s expansion could be the fact that RegioJet head Radim Jančura is aware oft the Brno traffic situation, the needs of travellers and the possibilities for further expansion of the firm, according to Desana Mertinková of Railway revue.