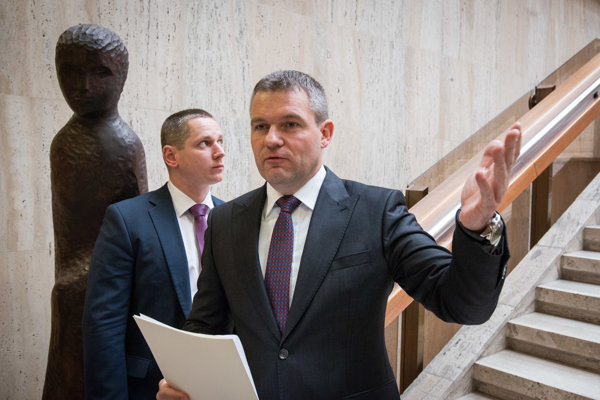 Pellegrini gained greater powers at the extraordinary government’s session on April 25. His role will now include the management, coordination and surveillance over the drawing of EU funds. Moreover, he will be the head of a new office covering Brussels’s Informatisation of Society programme, the TASR newswire reported.

The new office will only amount to centralisation of the existing department and employees, Pellegrini said.

“It means that existing departments and employees will be concentrated under one roof and managed by a new office,” he added, as quoted by TASR. “Establishment of the office won’t represent any extreme burdens on the state budget.”

The Investments and Informatisation Office will be the central authority for supervision, management, coordination and drawing of EU funds.

“It will be the central organ for investments, but only in areas that the cabinet designates,” Pellegrini continued. “This office will be also commissioned with drafting an infrastructure document of Slovakia. It means to define all infrastructure projects that need to be completed in all areas over the next few decades, while also to determine how much money is needed.”

Independent MP Miroslav Beblavý, who left Sieť shortly after elections, is rather critical of the step, saying that the government will establish a new “ministry”.

“The government will approve the biggest increase in political bureaucracy since 1995 when the Construction Ministry was founded by the [Vladimír] Mečiar cabinet,” Beblavý wrote on his Facebook profile.

According to him, Pellegrini’s new office will have the powers and also the features of a ministry, including writing laws. The MP also pointed to the fact that while recently Pellegrini has been talking about closing schools and dismissing teachers, he now wants a completely new office for himself.

Though the Slovensko.Digital platform is not happy with increasing the number of state employees, it is necessary to centralise the informatisation. The reason for such a step may be that the government realised it cannot progress in informatisation under the current setting.

“The new office obtained quite a strong mandate and we hope it will use it to adopt fundamental reforms in state IT,” Slovensko.Digital wrote on its Facebook profile.

The platform also reminded of 20 recommendations they submitted to the government, including Pellegrini. They will now wait to see how he will deal with them.