Number of schools should be reduced

Many may be closed during the government’s tenure, but wise approach is needed. 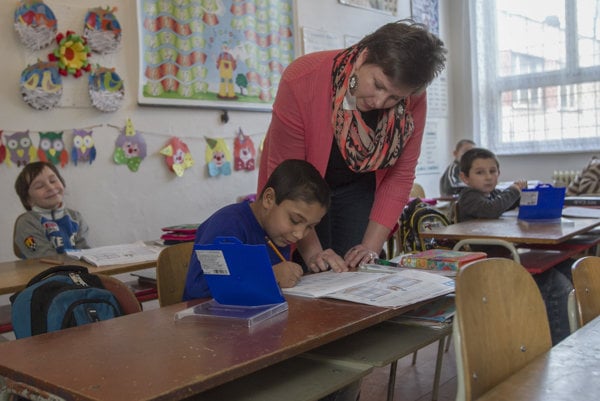 There should be fewer schools and teachers. (Source: SME - Tibor Somogyi)
Font size:A-|A+

Slovakia will soon see the number of primary and secondary schools drop, according to the government’s programme statement which indicates that the Education Ministry will optimise the network of schools. The plan has been met with mixed responses, and will likely lead to layoffs for teachers.

By the end of the current government’s tenure, there should be fewer primary and secondary schools and also universities, Deputy Prime Minister for Investments Peter Pellegrini stressed during an April 24 discussion on public-service RTVS.

“The OECD claims that compared with the European average we have fewer pupils per teacher in classrooms,” Pellegrini said.

The Education Ministry however said that they will focus mostly on primary schools and secondary schools. Officials stressed that they will first arrange discussions with experts and representatives of the Association of Slovak Towns and Villages (ZMOS) and other relevant subjects to prevent insufficient capacity in the future, a ministry’s press department told The Slovak Spectator.

“Closing the schools down is very unpopular step and politicians (especially the local ones) never want to do it,” said Vladimír Burjan, editor-in-chief of the Dobrá Škola magazine.

The OECD experts pointed to several problems of primary and secondary schools in Slovakia in the Reviews of School Resources: Slovak Republic 2015 report. They particularly stressed the disproportion between the size of schools and classes and the number of children, with many schools in where parents and their children are not interested, and the existence of poor-quality schools.

“The founders of schools have not responded properly to the negative population development during the past 25 years,” Burjan added.

On the other hand, the number of schools increased in the 1990s, especially after religious schools were founded. In 1996 there were 2,493 primary schools in Slovakia, and there were still 2,159 in 2013.

“This state could have been perceived this as a chance to improve the quality of education,” Burjan said. “But it has not improved proportionally to the decrease in number of pupils per teacher in the given period.”

The schools’ trade unions welcomed the plan to optimise the schools network, said its head Pavel Ondek. On the other hand, he stressed that it is necessary to make a deeper analysis. He does not think that closing schools will high savings in the sector.

There is precedence for closing schools and kindergartens have been closed over a lack of children. But now some parents in the affected areas do not know where to place their children, reminded Vladimír Crmoman of the Initiative of Slovak Teachers, as reported by the Denník N daily.

Ondek says that the ministry will have to take this risk into consideration when preparing specific plans.

He also referred to a document with specific tasks that the Education Ministry wants to carry out by the end of this year. A draft of that will be complete on May 16 and subsequently it will be circulated for comments. It then plans to invite experts, teachers and representatives of various initiatives to improve the state of education, followed by discussion with unions, the ministry informed in a press release.

However, school expert Zuzana Zimenová, who ran on the slate of Sieť party in the March parliamentary elections, does not think that closing schools will result in improved quality.

“The optimisation of the number of schools should follow certain remedial processes within the system,” Zimenová told The Slovak Spectator.

She also assumes that now there is no time to close schools and reduce the number of teachers. It is first necessary to look at financing and how it is used in the system.

Before closing the schools it is necessary to introduce new rules and also use indicators to help municipalities, which in fact found the schools in Slovakia, decide on the quality of existing schools and their perspective in order to decide which schools to keep.

“We however do not have such indicators at disposal,” Zimenová added, stressing that without them “any plans for flat closing of schools is risky.”

Another major problem is that many small schools are in areas occupied by national minorities, according to Burjan. According to the OECD data, there were 602 schools in municipalities with less than 1,000 inhabitants, with further 553 schools in municipalities with 1,000-2,000 inhabitants. The average size of the classrooms was 13.3 pupils and 15.5 pupils respectively.

The Slovak National Party (SNS), which has controlled the Education Ministry in a pair of governments, protested in the past against closing the Slovak schools, but so have parties representing the Hungarian minority.

Back in June 2015, parliament adopted an amendment submitted by Most-Híd MP Árpád Érsek, which postponed the provision concerning the minimum number of primary school pupils in classrooms to September 2016. This in fact saved the small schools with fewer classrooms, party officials insist.

Érsek and László A. Szabó from the Party of Hungarian Community (SMK) both said in an April interview with the Madari.sk website that they want to fight for keeping these schools open.

“As a result, in some localities we have two small schools close to each other, one with Slovak and one with Hungarian language,” Burjan said.

Except for the political reasons, he explained that parents often oppose closing the smaller schools. One reason is that they are afraid of their children commuting to bigger school. The second is that they often think smaller schools are better quality. This, however, is not always true as bigger schools are better equipped and offer more possibilities to children, Burjan opined.

He perceives the idea to close smaller schools positively. Since the funds into education are limited, it is necessary to use them as effectively as possible, he stressed.