Night Wolves to return to Bratislava, having problems in Poland

Members of the Russian motorcycling club Night Wolves will spend three days in Slovakia, arriving on May 4 from Vienna. 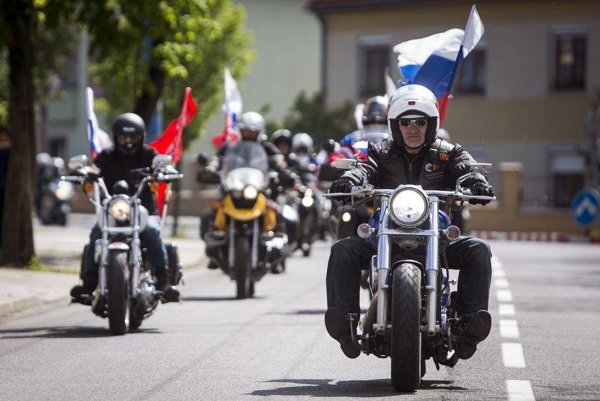 Their visit will start with laying wreaths to the Slavín memorial of Soviet soldiers killed in the World War on Slovak territory, according to the schedule obtained by the Pravda daily.

Later, however, they are slated to visit other towns connected with the fights of the Soviet (Russian and other Republics of the then Soviet Union) Red Army, including Svidník in eastern Slovakia, Banská Bystrica, Turčianske Teplice on the north of the country, as well as Jankov Vŕšok hill in the Strážovské Vrchy mountains.

They come to these places to lay wreaths at Soviet memorials. They will leave Slovakia on May 6 to continue on their ride, with the next stop in Budapest, Pravda wrote on April 30.

However, their ride already faced obstacles before reaching Slovakia: the group of seven Night Wolves, which includes four Slovaks, two Germans and one Russian lady, was not allowed to enter Poland, the Sme daily wrote on its website on May 1, citing the comments of Belarusian border police for the Russian RIA Novosti newswire. All of them were allegedly turned back, including those who are citizens of European Union member states.

Poland announced already by the end of week that it would not let the Night Wolves on its territory, citing security reasons. Russia reacted by stating that this step is a cynical gesture aimed at worsening bilateral Russian-Polish relations.

Poland banned the biker gang, known for its nationalism and open support of the Russian annexation of Crimea, Sme wrote. However, its members claim to be of Christian Orthodox faith and they allegedly despise criminal activities, unlike other gangs.

the Night Wolves head, Alexander Zaldostanov, is on EU’s blacklist due to his support for the Russian annexation of Crimea and the Russian presence in Ukraine, Pravda wrote.