Cleaning up prior to EU presidency

In expectation of hosting top sessions and meetings within Slovakia’s presidency of the Council of the European Union, Bratislava is getting a makeover. 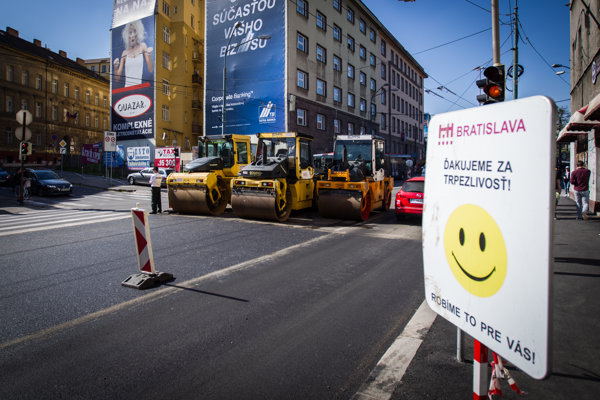 But while repairs of roads cause even bigger and more frequent traffic jams than usual, no significant improvement is expected.

“If somebody expects that after repairs transport in Bratislava would improve significantly, he is, alas, wrong,” Viliam Brtáň, head of the Stella Centrum which informs about the situation on roads, told the Sme daily, adding that the city’s transport infrastructure has never been solved. “It was never counted with such a significant increase in the number of motor vehicles.”

It is also questionable how long the renewed roads will last as these are not undergoing a thorough reconstruction but only repairs within ordinary maintenance.

The reason for not choosing a complex reconstruction Ľubomír Palčák of the Research Institute of Transport (VÚD) estimates that the city was looking for a compromise between money and time it has for work to be done.

Drivers in Bratislava have to count with delays during morning and evening peak hours. Road work is expected to continue for the next two months as the presidency begins on July 1.

Apart from roads the city is also repairing the fly-under road at Hodžovo square as well as dilapidated underpasses at Kozia street and Trnavské Mýto. The SNP Bridge should undergo repairs in August.

In the centre of Bratislava the revamping will focus on surroundings of the current seat of the Slovak Philharmonic, Reduta, which will be the centre of political happenings during the presidency.

Other areas to be repaired include accesses from hotels in which delegates of the EU council will be accommodated and sites visited by tourists.

The city also wants to add new public toilets as well as free wi-fi that should remain after the presidency, Sme wrote.