A piece of Bratislava in Florence

Historical veduta of Bratislava underwent restoration on its 450th anniversary. 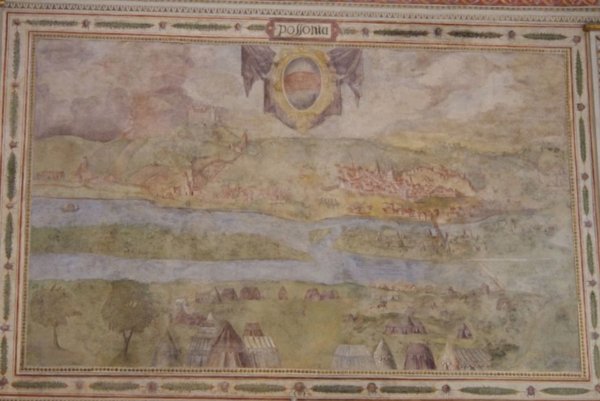 The veduta of Bratislava in Florence after restoration. (Source: Courtesy of the Bratislava office. )
Font size:A-|A+11

One of the oldest depictions of Bratislava, under its historical name Possonia, is located in the very centre of the Italian town of Florence. It is situated in the courtyard of Palazoo Vecchio, now the city hall, which on the occasion of the 450th anniversary of the fresco commissioned its restoration as the first out of 14 frescoes depicting towns of the Habsburg monarchy.

The vedute of the cities were a wedding present for Joanna of Austria, daughter of Ferdinand I of Habsburg who married Francesco I de’ Medici, in 1565, Iveta Kešeľáková of the Bratislava city council wrote in the press release.

“Father-in-law Cosimo II wanted to surprise Joanna,” archaeologist Margaréta Musilová from Bratislava’s City Institute of Monuments Preservation told the Pravda daily, adding that by the vedute, i.e. highly detailed paintings of a cityscape or some other vista, he wanted to cheer her and bring her home closer to her.

Musilová estimates that it was a leaflet from the coronation of Maximilian II, Joanna’s brother, in Bratislava in 1563 that served as inspiration for the fresco. One of such leaflets is held by the Bratislava City Gallery in its collections and the second, a colourful one, is held by the Austrian Academy of Sciences. Both are signed by initials HM. It is assumed that their author is either Hans Mayr or brothers Martin and Donat Hubschmann.

“Archaeologist Ivana Kvetánová with support of the Slovak Historical Institute in Rome studied in Florentine and Austrian archives to obtain closer information about the origin of the fresco and she succeeded,” said Musilová.

Her findings will be presented at a conference Veduta of Bratislava in Palazzo Vecchio in Florence (its hidden story) on May 4. An exhibition of the same name will open in Florence the same day too.

The Bratislava veduta is one of the better preserved and after its restoration, several monuments such as Rybárska brána gate, the water tower, city walls and the castle are now more visible. 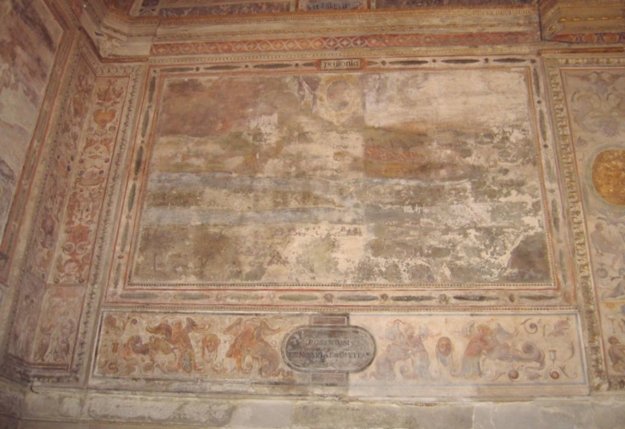 The veduta before restoration (Source: Courtesy of the Bratislava city council )

As the anniversary of the fresco, its recent restoration as well as Slovakia’s EU presidency are exceptional opportunities for promotion of Bratislava, the Bratislava city council will organise a reciprocal conference and exhibition of a digital photo of the fresco in the Primates Palace in autumn 2016, said Kešeľáková.