We should not renounce other stories, those that address and inspire people to find the best within themselves. 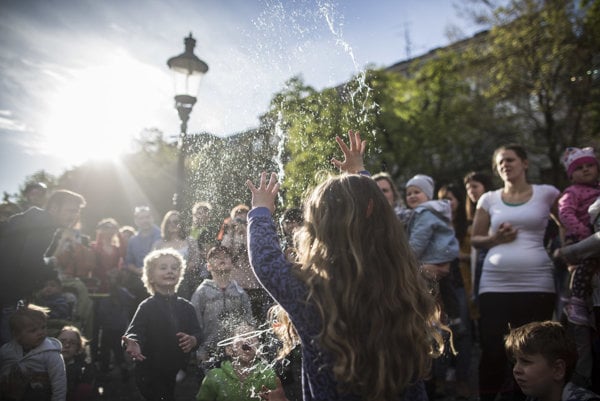 A white plastic bag is flowing in the wind. Like a passionate ballet dancer it floats over the reddened dried leafs, and one of the characters in the cult movie American Beauty says in a calm voice that it is the most beautiful thing he’s ever filmed. It was one of those days when it’s a minute away from snowing, and he realised that there was one entire life behind things. Sometimes there's so much beauty in the world... I feel like I can't take it, says the movie character in an American suburb where a family tragedy is waiting to happen.

His father, a former soldier with a sentiment for weapons and Nazi artefacts, in the end uses one of his guns and kills his neighbour. And for his son, the emptiness of the days makes the plastic bag floating in the wind the most beautiful thing in the world.

Beauty is all around us. We are doomed to seek it, even in places from which we have once expelled it. In communist neighbourhoods, where it was to be embodied in monsters made of metal, that someone called art 30 years ago. And people believed it. Later they got used to those monsters, and some have even managed to find some beauty in them eventually. Because removing them would be too much effort.

And yet we don’t give up. We are still moved by a sparrow that bathes in a dirty puddle and then takes off, resembling the phoenix that just rose from ashes to nurture our myth of rebirth.

Searching for beauty is in our genetic code. Like searching for good. In ourselves, and around us.

Matúš is a journalist and he often writes about mobsters, kidnappers, and political deviants of all kinds, straightforwardly, and with no comments. As he was walking his dog the other day, he met his neighbour who asked him whether he’d noticed how beautiful the surrounding of their house was. The trees were in bloom, and so were the flowers that the local pensioners planted there. The old trash bins had been replaced and there were no plastic bags stranded on the ground. He looked around and thought: “Indeed.” It was the kind of beauty that he rarely writes about in the newspaper, but he does not want to stop seeing it.

We write about people who have only become a caricature of public service. About people who only wear the masks of politicians but they’d rather smash and cut to flesh until they see blood as one of the Slovak songs filled with clero-fascist sentiment suggests. We tell their stories because we are often the only ones who can and thus must do it. We pour part of the reality on the reader, like a kind of black resin, so that the society realises it needs to wash its hands and face. But we shouldn’t renounce other stories too, those that address and inspire the best in people.

People, who have done no more and no less than that they taught a child to write his or her first ‘a’, or just prescribed the right medicine to an old lady, do not fit in the content of the newspaper. Because they apparently don’t belong there. Sometimes a writer notices them and lets them in his or her books, as a typical character, the good-doer. But ever fewer of us read those books anymore.

They did not make it to the papers

We did not write about a wizened small lady who sells lilacs at the market. And about her joy when you buy some of those flowers she picked by the road and she says: I’ll have a warm lunch today.

We did not write about the kindergarten teacher who would buy bread and butter with her own money every month to be able to feed the children whose parents did not pay for their food. Not even about the trolleybus driver who did not mind putting down the ramp for a man on a wheelchair and helped him into the vehicle.

We’d rather write about his colleague who, unwilling and annoyed, scolded a woman on a wheelchair about why she goes to the city alone and whether she wouldn’t be better off at home.

We did not write about the experienced oncologist who takes care of Kornélia. He shakes her hand every time she visits, and she feels like he is sincerely happy for her when she walks into his room on her own feet. When she woke up from a two-week-long drug-induced coma he told her he knew about everything that was happening with her in other wards. She fights with cancer and she does not seek the advice of impostors because she’s got a doctor she can trust.

But we did write about others, now former employees of the same hospital, who were stealing unused chemotherapy medication and trading it.

Is evil more authentic than good?

Nowadays it is mostly just advertisements that have licence for happy endings, and fake optimism lurks out of programmes where someone is guaranteed to laugh after every fifth sentence. But even the blue of the sky fades out after a while. If we lose the authenticity of happiness, we will also doubt the authenticity of suffering. Or vice versa.

We have armed ourselves with sharp cynicism that we are wagging around, hoping that we will cut and hit a raw nerve. But sometimes even those who make authentic efforts for good, bleed because they are not perfect.

Extremists activate the lowest instincts in part of the society, which seize the frustrated people just like a long-ignored hunger. We need to engage them and keep explaining the dark essence of extremism. But if we forget in the process that we also have to strengthen the brave, the noble, and the beautiful in the people who are the counterweight of extremism and who fortunately are still in the majority, then we will lose the fight for the better part of the society in the end.

We are not far from turning the efforts to deepen the good in ourselves and in others into a cliche without content. The frustrated nation would laugh right in our faces. But this is the most important task that we all face in the time when part of the society is threatened by dormant, extreme and latent fascism.

Because beauty is all around. It is humanity’s hope, that we are inclined to do good since our early days. Sometimes there is so little that is missing. Perhaps just someone’s story that can give us the courage.