President Andrej Kiska took part in a special TV programme commemorating the victory over fascism and Nazism, a celebration that reminds us to never give up the fight. 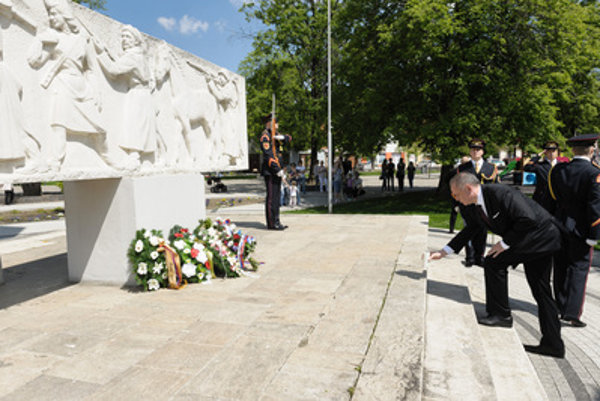 A special edition of public TV channel RTVS’ political discussion programme O 5 minút 12 (5 Minutes to 12) was shot in the recently opened Holocaust Museum in Sereď, in the Trnava Region, to mark Victory over Fascism Day, which is commemorated on May 8 in Slovakia.

Kiska also honoured the memory of World War II victims. He lit candles at graves of soldiers killed during the Slovak National Uprising (SNP) at the Municipal Cemetery, at the Soviet Army Monument at Námestie Slobody square and at the Holocaust Monument in Zámocký Park / Castle Park.

“Today we commemorate the anniversary of the end of WWII,” Kiska said. “I visited the Holocaust Museum and lit a symbolic candle at three monuments. I think that two basic messages need to be said in connection with this anniversary: we will not forget and we will be thankful [for our liberation]. We will not forget what the cause of this war was – it was chiefly hatred against people and nations, against groups of people. It was also a loss of fundamental human values and of respect for a human being. And there is a need to say one huge thank you. We primarily thank the soldiers of the Red Army, Russians, Ukrainians, Belarusians, but here in Slovakia we also need to thank Romanians, French and many other nations that fought for our country’s liberation,” President said.

While lighting candles, Kiska was accompanied by Irena Uhrinová, whose father Jozef Bojnanský fought in the Slovak Army. He switched from its ranks in Trnava to join the Slovak National Uprising. He died in the district of Prievidza, where he was temporarily buried for one year and later transported to the Sereď cemetery along with four more soldiers. She was only 11 when her father died.

Commenting on the law drafted by MP Zsolt Simon (independent) that would make excursions to the Auschwitz Nazi concentration camp mandatory for secondary school students, Martin Korčok, head of the Holocaust Museum in Sereď, said this is a good idea. “However, we should first come to grips with what we want to achieve by this,” he explained, as quoted by the TASR newswire. “If we want to reflect on what happens in our society in terms of growing support for extremist parties, movements and groups, it is important to explain the current parallels with the past to students.”

There were others speakers on the RTVS programme, one of whom was 91-year-old actress Dalma Spitzer. "The war has not ended, neither has evil. Rather the opposite is true, fascists still show their horns. And it is no longer about our generation, it’s about our children and grandchildren not having to experience what we experienced and, therefore, we need to fight the evil everywhere and at all times,” she emphasized.

Victory over Fascism Day is a public holiday in Slovakia and celebrated on May 8 as in most of Europe. However, Commonwealth countries celebrate V-E Day on May 7 and Russians on May 9. In Slovakia, there will be also a celebration of the 71st anniversary of the end of the war on May 9.