Horná Štubňa belongs among the villages of the German-language belt in Slovakia, close to the famous ancient mining town of Kremnica. This area is composed of 24 villages and known as Hauerland. 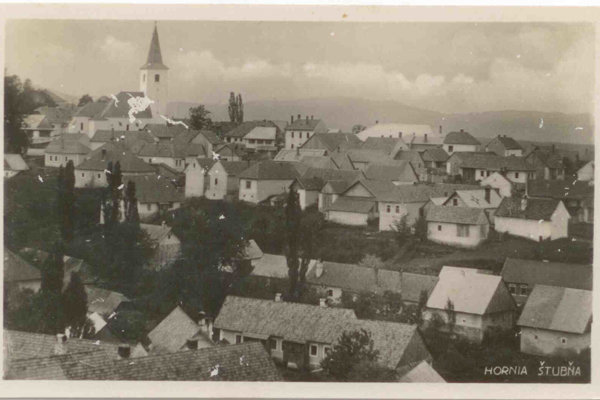 This name stems from the fact that the names of eight of them end with “hau”, e.g. Beneschhau, Glaserhau, or Kuneschhau.

Hau means man-made meadow by clearcutting in German – and this also tells tales about the beginnings of the local settlement. Villages were established in the deep woods which are abundant in Hauerland even today. Horná Štubňa (Oberstuben in German), too, is surrounded by woods. The main Kremnica forest bedel used to be located in the village and employed the villagers.

Štubňa lumberjacks supplied the sawmill in nearby Turček with lumber and providd the wider surroundings with wood shingles. Štubňa inhabitants were perceived as the best experts on the construction of wooden cabins in the whole of Slovkia. They were invited to build homes for lumberjacks in the Low Tatras, the Spiš region, for houses for paper-mill workers in Harmanec, and even got offers from Bohemia.

Horná Štubňa belonged among the more populous villages. To get an idea about how many Germans were represented in Hauerland, let us look at the inhabitants of Štubňa. In the years following World War I, there were 4,000 people living there, of which 817 were schoolchildren. Of them, 800 attended a German school and the remaining went to a Slovak one. Further data from 1938 records 3,822 inhabitants, of that 142 Slovaks.

A  known fact is that during World War II, German villages became the target of partisan terror. Local Germans were the target of hatred, due to their origin, by groups staying in the mountains which often operated independently and sometimes were led by dubious individuals.

After the end of war, the Germans from Štubňa left for Germany and Austria. This view of the village dates back to 1931.