Former Supreme Court president Štefan Harabin will learn the verdict on whether or not his statements addressed to Supreme Court chair Daniela Švecová stepped over the line on May 13.

Though the disciplinary senate presided over by Juraj Florovič met on May 10, it postponed the proceeding, the TASR newswire wrote.

Harabin asks the senate to exonerate him. He considers the proposal for disciplinary proceedings against him, filed by Judicial Council chair Jana Bajánková, to be completely unsubstantiated. In case her proposal is accepted, Harabin demands psychiatric evaluation of the Supreme Court chair and the summoning of further witnesses, TASR wrote.

Bajánková wants a fine to be levied on Harabin and for his salary to be cut by 30 percent for a period of three years over his statements that Švecová is “in her own way pitiful” and someone who might “end up in a psychiatric hospital”. 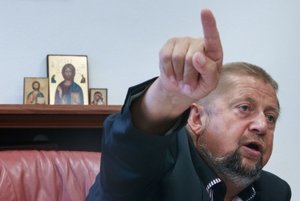 Harabin’s speech before the senate was quite emotional, as he raised his voice, stomped his feet and finally broke into tears, TASR wrote. After being repeatedly reprimanded for his behaviour, Harabin apologised to the senate, adding that he feels bullied.

Harabin did not spare choice words for the top representatives of the judiciary, repeatedly calling both Švecová and Bajánková “the juristitutes”, as reported by TASR. As he later explained, he uses the term for judges who allow themselves to be controlled by politicians. Before the senate, he declared that he fully stands behind his previous statements, according to which the Supreme Court chair is “pitiful” and could “end up in a psychiatric hospital”, insisting that she should be joined there also by Bajánková.

“This is how low the judiciary has sunk,” Harabin said about Švecová, as quoted by TASR.

He criticised her for her decision to reassign Harabin’s senate members to different senates in the wake of controversial verdicts such as in the case of police officials convicted for corruption. These verdicts were criticised also by Interior Minister Robert Kaliňák, TASR wrote.