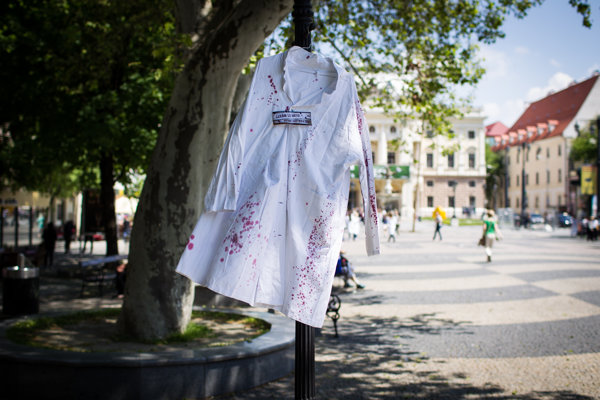 Humanitarian organisation Magna has launched an information campaign with installing bloodstained medical coats on Hviezdoslavovo Square in Bratislava. The aim is to point to the lack of doctors in Syria, the TASR newswire reported.

The organisation has already helped refugees in Hungary and later in the refugee camps in Croatia. After closing the so-called Balkan route, it started a humanitarian mission in Syria and surrounding countries.

“We decided to bring the war from Syria directly to the centre of Bratislava and to Slovakia and tell people that this war is not as far as they think, and that it concerns us like every human life in the world,” Martin Bandžák, executive director of Magna in Slovakia, told TASR.

Magna provides medical treatment together with Syrian doctors within mobile clinics in territories located north of the city of Homs.

“There are 200,000 people in this area and the mobile clinic is the only possibility to get to them,” Bandžák said, as quoted by TASR. “We address 9,000 children and their family members a month and provide them with medical treatment.”

The public can support the activities of Magna via sending a text message containing the word “MAGNA” to 806. After sending the message, a regular monthly contribution at €3 will activate. It is also possible to donate money via bank transfer.

“Our aim is that people understand and help with us for a longer time since the conflict in Syria will not be solved tomorrow and the aid there will be necessary,” Bandžák added, as quoted by TASR.

He went on to say that for €3 they will be able to buy medication for one patient, while for €9 they secure examination of 10 patients and for €30 they will secure the operation of the mobile clinic for one whole day.