A two-day business forum aiming to help establish new economic relations between Germany and eastern Slovakia has been opened with panel discussions in Košice on May 11. 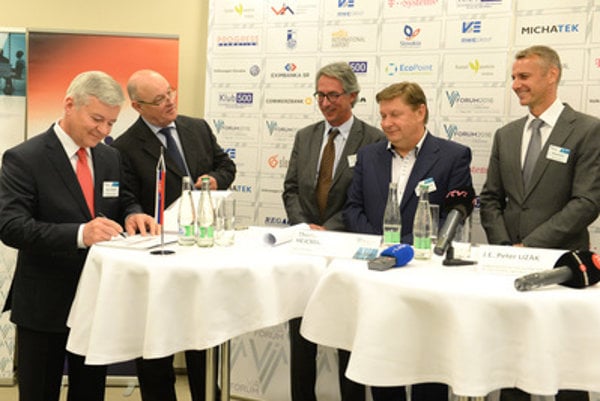 “This conference has the goal of establishing new relations, presenting the region of eastern Slovakia and its opportunities, and providing scope for business entities and new investors,” Eastern-Slovak Investment Agency (VIA) CEO Peter Cacara told the TASR newswire. He noted that Germany is the most important business partner for Slovakia.

Bilateral meetings of the InterReCo 2016 regional business forum are scheduled for Friday, May 13.

The Wednesday part of the forum was attended by around 120 entities from Slovakia, Germany and other countries, featuring companies from the IT, engineering and metallurgy sectors, among others.

The German Ambassador to Slovakia, Thomas Goetz, also present at the forum, praised the current level of economic cooperation between the two countries, pointing to the presence of German investors in eastern Slovakia, including T-Systems, RWE Group and Michatek. Commenting on the strong points of eastern Slovakia, Goetz named the high potential of its skilled labour force – which has begun to exhaust itself in recent years, however. Necessary measures aimed at tackling this problem include the development of dual education, he said.

“A higher number of technical staff with secondary specialised education will be needed in the next five to ten years but we’re on the way to dealing with this,” he told TASR.

Perhaps the weakest point of the region is its insufficient transport infrastructure, the ambassador pointed out.

A new publication in English drafted by the VIA, a guide for potential investors, was unveiled at the forum on the same day. Called the East Slovakia Investment Guide, the booklet aims to introduce the region and its economy and business options, support programmes as well as outlining the level of education and the structure of the labour force. Set to be distributed by Slovak representative offices abroad, the guide will be employed also by municipalities, the Economy Ministry and Slovak Agency for the Development of Investments and Trade (SARIO).

“We also launched a website of the same name today – www.esig.sk, which will be further developed in the future,” Cacara said. “It’ll serve as an information entrance-way into the region and will provide insights into the current issues of its economy.” An eastern-Slovakia information guide for foreign entrepreneurs was lacking in the past, according to Košice Mayor Richard Raši.