Extremism moving from internet to the streets

Police have registered an increased number of extremist criminal acts thus far in 2016.

More than 3,000 Slovaks died in the Slovak National Uprising (August – October 1944) against Nazi occupation forces. This year Slovakia commemorated 71st Victory Over Fascism Day on May 8, but hatred looks to be increasingly present in the public sphere, according to police officials.

“We will not forget what the cause of this war was – it was chiefly hatred against people and nations, against groups of people,” President Andrej Kiska said during debate of public broadcaster RTVS. “It was also a loss of fundamental human values and of respect for a human being.” 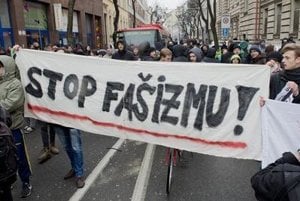 Seven decades after World War II ended police are now noting an increased number of extremist acts. There were 19 cases of racist or extremist criminal acts between January and March 2016 while a year earlier it was just 8 cases within same time period. For example, 32-year-old Július Š. physically attacked bystanders in Bratislava and using extremist gestures and slogans in early April.

There is even more hatred on internet. Jews, Roma and refugees have been frequent targets of members and supporters of far-right party Kotleba – People’s Party Our Slovakia (ĽSNS) led by Marián Kotleba which made it to parliament in the March election. Though some of them wish to those minorities death and torture, the Slovak judiciary mostly fails to punish these people for extremism.

“Police in cooperation with intelligence services should have taken action against them long ago,” says security analyst Jaroslav Naď of the Slovak Security Policy Institute, adding that procrastination of authorities encourage extremists. “We gave them a finger, and they took the whole hand.” 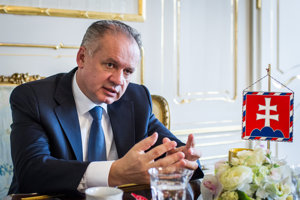 Read also: Kiska: On election night I was waiting for a miracle Read more

Attack on a café

Around five and half hours before football match between clubs of Trenčín and Bratislava on April 29 in Trnava two groups of men counting several dozen each met in a family café of Jozef Viskupič of OĽaNO-NOVA party. Violence ensued and groups were throwing tiles and flower pots at each, while ignoring the fact that there were customers and pregnant waitress. They then left before police arrived.

Though it may seem like common brawl between football fans but police investigation showed that they brought with them about 40 tiles which are not near the café. They also did not carry flags or having outfit typical for football fans rather outfit which is typical for extremists, according to Viskupič.

What is more they put the street camera out of service immediately before the fight, he added.

“What we have not been experiencing for 10 years came back; extremism which was visible only in media and social networks became real also in Trnava,” Viskupič who is known for his anti-extremist activities told The Slovak Spectator. “It is possible to use football as set piece for delivering the message but I don’t want to be paranoid; I will leave it to police investigation.”

The police started criminal prosecution for disorderly conduct and damage to property. 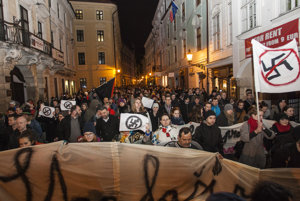 Extremism in politics and on the streets

The statistical rise in extremist crimes in statistics is not connected with ĽSNS in parliament but rather the fact that state authorities have not been responding to cases from recent years, according to Tomáš Nociar, a political scientist focusing on extremism.

Extremism is on the rise also in other European countries and surveys indicate that support of extremist ideas and parties have been present here for a long time, according to political scientist Radoslav Štefančík, the dean of the Faculty of Applied Languages at The University of Economics in Bratislava.

“I remember one student who was willing to accept deportation of Roma abroad despite she was a history student,” Štefančík told The Slovak Spectator. “She had only one condition that it should be done in more humane way than we used for transporting Jews to concentration camps in WWII.”

Moreover, the mutual relationship between increasing support of far-right parties and violent activities of extremists could be a double-edged sword. Extremist movements and their supporters have to be sure that violent incidents are not connected to them because the public mostly condemns such activities, according to Nociar.

“On the other hand, the public acceptance [of extremism] encourage violent activities of single persons or groups which are accepting violence as their working method,” Nociar said.

After ĽSNS made it to the parliament media together with activists took a look on Facebook profiles of party’s members and supporters. Some of  their statements were similar to those which have been punished in foreign countries.

For example, in May 2011 an anonymous administrator of an unofficial ĽSNS Facebook page stated in his or her reaction to a story about Roma that they should go to the gas chambers. After blogger Ján Benčík wrote about it the page disappeared.

Also Facebook profile of infamous Milan Mazurek, an MP for ĽSNS, disappeared after media reported about his statements that refugees are “plague” and “primitive foreigners”. Mazurek was caught on video vulgarly shouting on Muslim family during 2015 anti-Muslim protest.

To compare, Czech extremist politician Adam Bartoš was punished by suspended sentence of one year in March 2016 for stating that “Jewish question has not yet been satisfactorily solved”. Bartoš has appealed against the decision.

Further, Lutz Bachmann, the founder of the German anti-Islam organisation Pegida, was convicted of “inciting racial hatred” and fined €9,600 in May 2016 for calling refugees “cattle”, “scumbags”, and “filth”.

Racist comments which can be published without punishment encourage others to do the same because it weakens public norms which people follow, according to Štefančík.

“If denial of the current norms and promoting of those which are non-democratic becomes a rule there is assumption that the number of those people will grow,” Štefančík said.

Sme daily asked police whether they investigated suspicions of committing any crime including extremism by ĽSNS parliament members. The police responded that it cannot provide such information due to privacy issues.

However, Prešov regional police office Daniel Džobanik confirmed for The Slovak Spectator that police are investigating some of Mazurek’s statements on the internet. Also Aktuality.sk news website reported on May 10 that police started criminal prosecution of Kroupa for propagation and support of groups wanting to suppress basic human rights.

Though it has failed to definitively confirm they are the same people, Transparency International Slovakia found 15 names including Mazurek which are matching names of ĽSNS candidates who have been accused of criminal acts.

The Slovak Information Service (SIS), the country's main intelligence agency, claims that it deals with extremism as legislation obliges it to do and that it reports its discoveries to the authorised authorities.

Besides operational cooperation with police, SIS sent almost 100 of intelligence information related to extremist including extremist statements on internet, according to SIS spokesperson Branislav Zvara.

“We would also like to say that only authorised receivers of our intelligence production and respective parliament bodies can objectively evaluate effectiveness and speed of our work,” Zvara said.

Courts decided in 105 cases related to extremism and racial hatred between 2012 and April 2016, according to Justice Ministry statistics. Most of punished people were spreading extremist symbols on the internet, but there were also brawlers who verbally or physically attacked Roma or were shouting Nazi slogans.

The police have been dealing with extremism for a long time. They cooperate with other state institutions, educates police officers and provide professional support to sport unions in this matter, according to Police Corps Presidium spokesman Michal Slivka.

“Extremism should not be fought only by repression,” Slivka said.

Interior Minister Robert Kaliňák stated that authorities struggle to fight against extremism because those people learned how to speak in public without being punished.

“This is extremist speciality, to balance on the edge of legality,” Kaliňák told the press. “Police have then much more difficult work.”