Every day we must fight against evil again and again. 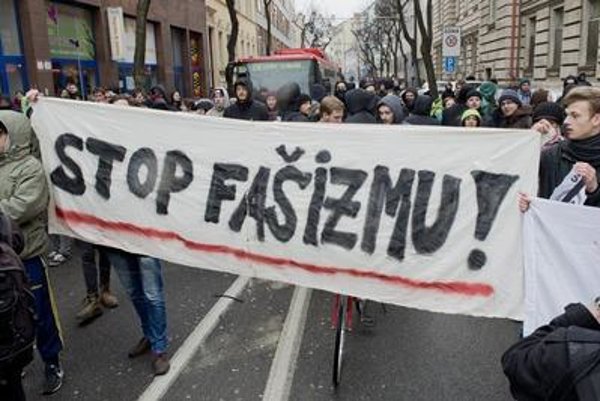 Without the memories we share, there is no collective identity. Every spring Europe remembers the end of World War II. In Slovakia, May 8 is the day of victory over fascism.

Last year’s anniversary — marking 70 years — was remembered with big events all over Europe, including Slovakia. One year later, Slovakia is a country where far-right extremists sit in the parliament for the first time since the war. Real fascists are back to the parliament, and extremist opinions once again flourish in the country and appeal to an ever-larger audience.

The mood is not just apparent in political representation, it also shows on the outside: street fights, skin heads, heavy boots, online and offline hate speech and attacks on otherness.

We thought it was enough to tell our children, at home and in schools, that war is a terrible, terrible thing, and fascism and Nazism are monstrous ideologies. It seems that they need to hear more than just the facts and the chronology of events that this continent has been through in the previous century. They need to hear why the things happened in the first place, and what it means to us today. We have left them on their own, and they had to go and search for other interpretations. What they found were people who told them another version of history.

The generation that is growing up in our schools and families right now will be left with what we have accumulated in our collective memory in the past seven decades as first-hand account of the war become ever more scarce. But we have apparently done too little to cultivate our collective memory and protect it from forgetting.

Seventy years after the war last year’s May 8 anniversary was just another day off for most of us, or a faint memory of things long gone. We have allowed these things to slip our collective mind. Without remembering the bad times we are not the same people we believe we are.

This helps explain why many people have not hesitated to vote for people who tell us that we are better off on our own, and who blame the European Union as the source of all our problems. We forget what it was to build the EU and how successful it has been in preventing the monstrosities of war from happening again. We preferred to forget, because it did not fit our calculations and left no room for solidarity in our equations.

But we should not forget that peace and democracy cannot be measured with numbers (whether quotas of people or trade balances), or expressed in percentage points.

It is not enough to defeat fascism once. Every day each of us fights his or her own fight, against the evil out in the world but also the evil inside of ourselves. We should make sure to save space for our collective memory.