Government will buy stadium from Kmotrík

The disputed and much discussed construction of the national football stadium has seen a new twist of events: on May 10, Education Minister Peter Plavčan signed an agreement which seals the future purchase from businessman Ivan Kmotrík. 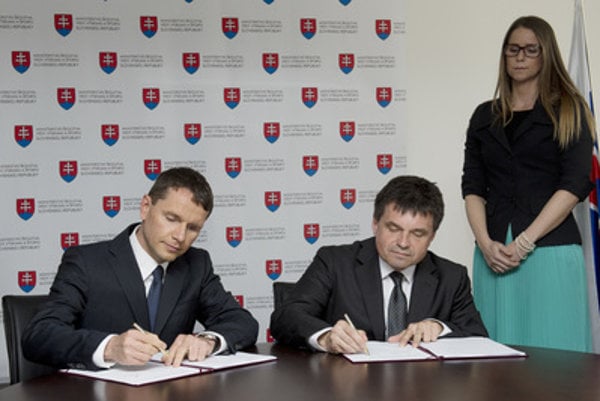 Education Minister Peter Plavčan (C)) and chairman of the board of NFŠ, a.s. Pavel Komorník sign a memo on future contract on completion of the National Football Stadium on May 10, 2016. (Source: TASR)
Font size:A-|A+

Kmotrík shall build the stadium and then the state will buy it for €75 million. This procedure is a new trick how to bypass the rules of public procurement, the Sme daily wrote on May 11. It also explains why the amendment to the law on public debt brake is a must for Prime Minister Robert Fico and Finance Minister Peter Kažimír.

The purchase of a stadium from a crony sends a message to all other potential clients that the third Fico government and its thirst for investment projects can be relied upon.

The official reason for such a procedure is that everywhere, national stadiums are common phenomenon ,and everywhere, the state gets engaged. But is also shows political priorities: whether the €75 million go for a venue where three national matches a year are played; or for the increase in salaries of dissatisfied teachers – within the same ministry as the education minister is also in charge of sport, science and research.

The stadium, to be finished by 2018 by the Grafobal company of Kmotrík,  should have originally cost seven million euros less. The construction works shall start in a few weeks, and the structural work shall be done by the Strabag company for €42 million. The stadium with capacity of 23,000 visitors for the national team, but also for the Slovan Bratislava club, should have been build already during the second Robert Fico term but later former prime minister Iveta Radičová stopped the project. Originally, Kmotrík wanted to build the stadium himself, but later changed his mind and announced he would not finance its construction.

Plavčan (a Slovak National party-SNS nominee) decided for this option as it is allegedly the best solution form the point of time, money and processing. However, it still has to be approved by the Public Procurement Office and the European Commission – if state aid was involved, the EC would have the final say.