The new light Aligator armoured vehicle of Slovak production has its world premiere at the IDEB international defence equipment fair in Bratislava on May 10-12. 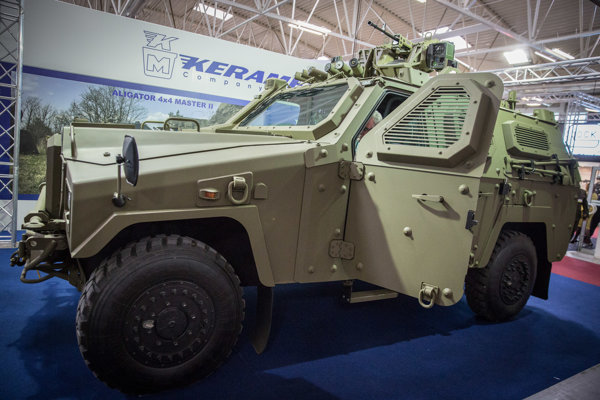 This is the third generation of Aligators. Older types have been part of Slovak military equipment since 2005. According to the producer, the new Aligator is one metre longer, while its transport capacity has been increased from four to nine or even ten people, with a maximum load of 750 kilograms. The vehicle, weighing 3.2 tonnes can reach a maximum speed of 130 km/h and even 145 km/h in exceptional situations on paved roads.

“These changes reflect the latest trends in the world, with growing interest in larger and more powerful vehicles that are able to carry more people and equipment,” said Igor Junas, CEO of Kerametal which oversaw the development and production of the vehicle, as quoted by the TASR newswire.

The third generation of Aligators was developed by Slovak designers and was also produced in Slovakia. As many as 20 companies from the Slovak defence industry were involved in the project. Junas estimates that development of the vehicle alone helped to keep and create around 60 jobs. After production is launched, the project could provide jobs to 500 skilled staff members.

Several foreign entities have already shown interest in the new vehicle, mainly countries from Asia. The company has already recorded its first orders.

IDEB is taking place on May 10-12 at the Incheba centre in Bratislava. The exhibitors are displaying armoured vehicles, tanks, explosives detectors, combat and reconnaissance vehicles, howitzers, arms, ammunition, the latest communications and IT equipment, mobile containers, flight simulators and other army and police equipment. The fair features the Slovak premiere of two other domestic products – the EVA howitzer and DIANA artillery gun.