Blog: Report from field - How we save lives in Syria

The difficulty of the operation of Magna's mobile units is in the territory of a sustained conflict very high. But it's the only way we can help and save lives here. 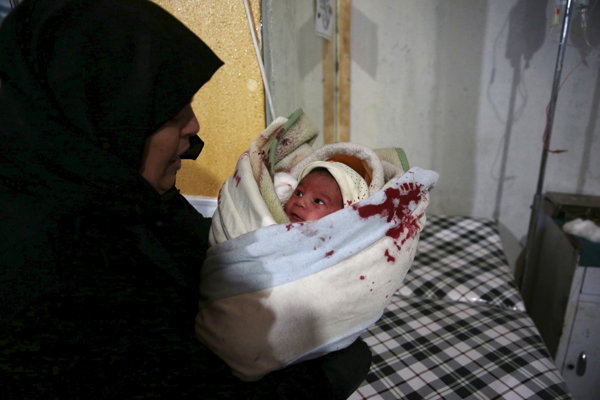 "I've run out of options: I cannot leave and I cannot stay, because both choices are too dangerous and financially demanding. I cannot die because I have children and a family that I need to take care of…"

These are the thoughts of many people who stayed in Syria. The time has stopped terribly - unexpectedly, violently, with brutal consequences, with the loss of loved ones and loss of homes; for those who stayed but also for those escaped. Losing the past and future that is uncertain. Syrians are being captivated in terrible reality for more than five years. Before the war, Syria was a modern, although a highly traditional country with history dating back to 9000 BC. But in 2011, after the Arab Spring came, the development has stopped and the period of war, suffering, and death came.

The main protagonist of the war in Syria, who is the centre and the tool of government opposition and rebel groups fighting in this conflict, is the civilian population. Over 13.5 million people are nowadays without their homes. Almost 9 million people are in a situation when in need of urgent humanitarian assistance and help. More than 6.5 million are internally displaced, living away from their original homes. Internal displacement means that a large part of the population left their homes in big cities, which were turned into battlegrounds and targets of bombings. They live in remote communities where the danger of bombing is somewhat lower.

However they live there without basic resources and infrastructure, including non-existent health care. These mass movements and internal displacement of inhabitants are one of the war strategies of the government and also of the opposition groups participating in war. At the same time it is also one of the remaining strategies for people to survive.

Bombing is targeted, not random and targets of the attacks are known and have "expected" results. These processes of siege and bombarding "clean" and demographically homogenize population in different regions by political, racial, or religious divisions and interests of the fighting groups. Larger cities are under siege since the beginning of the conflict. Their infrastructure is constantly disturbed and their territory continuously bombed. This is how internally displaced population, which settles in outlying and rural parts of the country and if possible far outside the besieged area, emerged.

It is necessary that we help them through with our mobile clinics that come to them and heal them where they live.

Magna has long-lasting expertise in providing mobile units. In Nicaragua they helped people in outlying villages. In Burma after Nargis, and recently a semi-mobile unit  helped saving people after the earthquake in Nepal.

But our current help is situated in a war territory. Syria is a country with many new and unknown unpredictable circumstances. To be able to direct the needs of the inhabitants who live in war zones, we need to reconsider proven methods of humanitarian intervention. One of the main essential changes in our start-up project in Syria for us is a very close cooperation with local partners since the beginning. Our units operate at the north of the city Homs, where approximately 200,000 inhabitants live in the "attraction zone".

Our mobile medical teams go out on excursions on a daily basis, if the maximum possible level of safety is guaranteed. The safety of the doctors and health workers comes first and is equivalent to the safety of the people we help.

Mobile medical team consist of a doctor, a nurse, a midwife, a psychologist, and a nutritionist. It is very important that the aid is regular and stable - that we operate under a fixed regime and in long term. Everywhere our team comes we try to find a stable place to fulfill their daily activities - for example, on a farm, in houses, in mosques and so on. We provide primary health care. We take care especially for pregnant women and children, we prevent their malnutrition. If we identify problems of sexual violence in the area we also address these cases through the consultations, but also with the report to the hospital if necessary. At the same we provide psychosocial care, which is extremely important in these traumatized communities.

The difficulty of the operation of these units, in terms of logistics, as well as the capacity and the financial side, is in the territory of a sustained conflict very high. But it's the only way we can help and save lives here.