Now it looks like they have found a new place – the former secondary chemistry school at Račianska 78 administered by Bratislava Region. 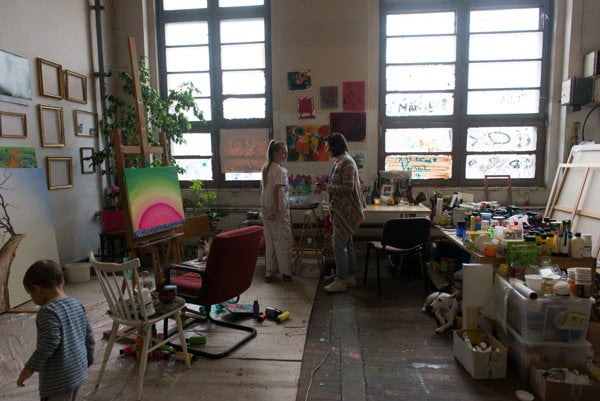 One of the ateliers at Cvernovka, a home for many so-called creatives. (Source: Jana Liptáková)
Font size:A-|A+5

A VIBRANT community of painters, sculptors, architects, designers, photographers and other so-called creatives has grown from below without any institutionalised support, at the former thread factory colloquially known as Cvernovka. Now, after failing to agree with the property owner, they must move elsewhere. On Labour Day, May 1, they opened their ateliers to visitors for the sixth and final time.

“One of the things which makes Cvernovka very interesting is that it has brought together a large number of various types of crafts that are characterised by the term creative industry,” said film director Viliam Csino, one of founders of the Cvernovka Foundation which launched the initiative to make Cvernovka a centre of creative industry, culture and social development. “From people, for whom it is enough to have a place to put a laptop and connect to the internet up to people manufacturing cable cars… If somebody would weld a spacecraft here, there will be somebody able to write software for it.”

All the painters, sculptors, architects, designers, photographers and others have to empty the old Cvernovka factory, which actually gave their community its name by June 30 due to a planned reconstruction. Thus, visitors had their last chance to see the ateliers of people who design books or posters for the Slovak National Gallery, a movable house called Ecocapsule, or cable cars already used in the Slovak mountains, to mention just a few. 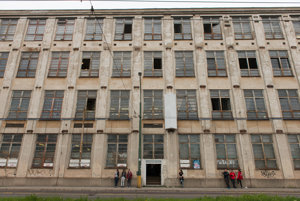 The Cvernovka Foundation had the support of the whole creative hub to find a new place where the entire community could move. In total there are about 30 ateliers or entities dwelling in the Pradiareň (the spinning mill) building, as is the official name of the Cvernovka building, of which about two thirds account for creative industry. Now they use roughly 6,000-7,000 square metres, their new location might be smaller, but not less than 3,000-4,000 square metres.

Now it looks like they have found a new place – the former secondary chemistry school at Račianska 78 administered by Bratislava Region.

The head of Bratislava Region, Pavol Frešo, and administator of the Cvernovka Foundation Branislav Čavoj signed a memorandum on cooperation on May 12. 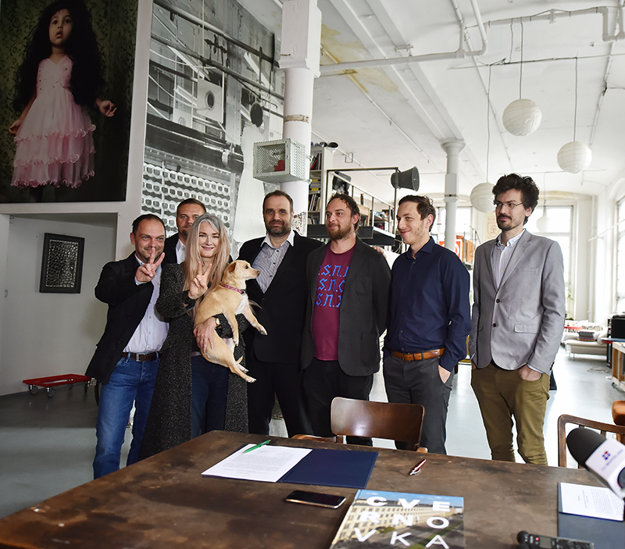 The former school has not been serving its original purpose for more than six years and as it appealed to the Cvernovka Foundation, they asked its administrator who decided to give them a helping hand.

“Our intention is to elevate the whole premises [of the school] to a level we see, for example, in Finland or Great Britain where the creative industry has much deeper roots,” said Frešo as quoted in a press release.

While Bratislava Region has offered the foundation a long-term rental of the former school, the contract still has to be approved by regional councillors.

The plan of the Cvernovka Foundation is to create in the former school, which also includes a dormitory and a gym, a new creative centre of culture not only for members of the Cvernovka community but also the public.

“Already at Cvernovka we had a plan to offer some public functions, some concerts, various kinds of events, and theatre that we would be able to make available in this new site,” said designer Boris Meluš, one of founders of the Cvernovka Foundation, in the press release.

Now Cvernovka is used as the name of the community of artists, but also as a colloquial name for the whole premises of the former thread factory as well the building which gave shelter to the creative community enjoying the synergistic effect of being together.

The first artists moved into Pradiareň sometime in the early 2000s. Since it ceased to function as a factory in the early 2000s, ownership has changed several times. As its location is close to the city centre and the planned development on the Danube embankment as well as the Twin City project, and because it is one of last industrial premises in Bratislava, plans to knock down the buildings have sparked opposition. In the end the historical dye shop Farbiareň was pulled down but one of the buildings, Pradiareň, was declared a national cultural monument.

The Slovak-Finnish developer YIT Slovakia acquired the Cvernovka premises from the former owner, the French Hamilton Group, last November. After months of negotiations it asked tenants of Pradiareň to move out as it plans to do historical research here and then to restore it.

“We agreed that we did not agree,” Meluš told The Slovak Spectator, praising the open approach and culture of discussion with YIT Slovakia. The Foundation Cvernovka wanted either to buy Pradiareň or agree with the developer on creation of a centre for creative industry in it, but the negotiations failed.

YIT Slovakia explained that they did not extend existing tenant contracts due to the bad condition in which the building is and also because it cannot do the research and restoration when the building is in full operation.

“We discussed more than three months with representatives of the tenants and there were more alternatives in the game,” Renáta Zaťková, marketing manager of YIT Slovakia, told The Slovak Spectator. “But we failed to find a solution that would be, during the time being, feasible and acceptable for both parties during the current situation.”

YIT Slovakia, which consults also with its parent company in Finland, where, for example, centres of creative industry in old factories already exist, for now does not specify its plans for Pradiareň. The intention of YIT is to keep the genius loci of this area also in the future project but today it is too early to specify usage of individual objects, said Zaťková.

“We realise the value of the creative hub that has grown here over the years and thus we do not reject the idea of its continuation,” said Zaťková. “With support of the city or also the state and securing of financing via various funds, grants and subsidies there could be created here a sustainable project as we see in several examples abroad.”

For now, for YIT Slovakia, the priority is restoration of the building in line with results of the historical research. As it realises the value of the entire premises, it ponders holding an idea competition for the whole area, but it is too early to speak about details.

In terms of the entire premises in the shape of a triangle shaped by Košická, Svätoplukova and Páričkova streets Csino pointed to the unique character of this area as from the side of the city centre it borders with the already built as well as planned new developments including high-rises, while behind the former factory there is a housing estate known as 500 apartments. The leitmotif of the concept they offered to YIT Slovakia was that they would create here a clear creative centre, maybe with less welding, while this would create a very pleasant hub with amenities and public space between the mono-cultural construction which will be here and the existing housing estate, Csino told during a discussion on May 1.

“It should have been a living building,” said Csino. He is afraid that if YIT Slovakia turned Pradiareň into an administrative building, life in it would cease at 19:00-20:00. He compared the current situation with the precisely restored so-called Sklad č. 7 (Warehouse Nr 7) on the embankment of the Danube River next to Eurovea.

“It has been restored for a large sum of money, but when you approach closer, you see behind the nicely restored, but dust-covered widows you see that there is nothing, only cement,” said Csino.

The Cvernovka Foundation did not rule out a possible return to its original site but this will be also a question of rental conditions after the renovation.

“We do not doubt that YIT Slovakia will restore the building very nicely but we repeated to them several times that the amount of investment into a square metre defines the composition of [future] tenants,” Csino said during a discussion on May 1.