For the third year, but for the first time as only an operatic and dance festival, Eurokontext brings European performing art to Bratislava. 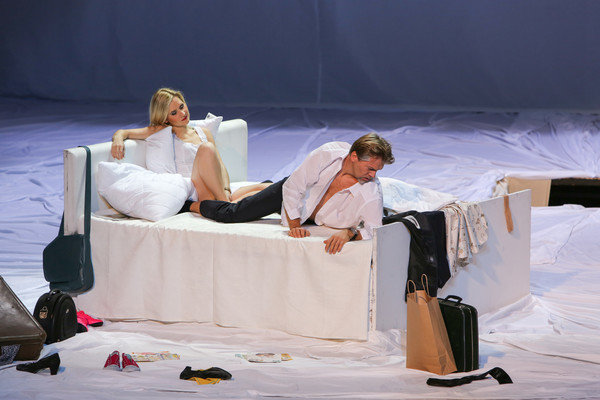 Alongside the evident tendency towards international cooperation, it is a festival that offers exchange of experience and comparison for professionals and a modification of the offering for theatre-goers. After a first, or rather “zero” year in 2014 and a drama-only edition in 2015, this year brings – between May 20 and June 3 in the host theatre, the Slovak National Theatre (SND) – musical and dance performances, including the art of mime, modern dance and flamenco.

The operatic part presents a wide span of works, ranging from baroque to the most contemporary times.

One of the logical choices was National Theatre Prague, an opera stage in the neighbouring Czech Republic, which brings two pieces: Orango/Anti-Formalist Rayok by Dmitri Shostakovich and From the House of Dead, opera by Leoš Janáček to the novel by F.M. Dostoyevsky.

“Guest performance of the National Theatre’s Opera with these two works is a joint decision of art directors of both houses [Prague National Theatre and SND],” Director of Opera of the National Theatre and the State Opera in Prague Silvia Hroncová told the Slovak Spectator about the dramaturgy selection. “We know what the other house works on, as we try to visit one another’s premiere as much as possible. Our cooperation is a natural part of live relations – several excellent Slovak singers give guest acts in Prague, and recently this goes also for directors (Martin Čičvák, Sláva Daubnerová) and choreographers (Tomáš Krivošík, Stanislava Vlčeková). Staging of the operas Orango and Anti-Formalist Rayok is the result of our long-term effort to highlight opera as a genre able to talk in modern language about the contemporary world.”

Asked about the feedback and reactions of audiences in their hometown, Hroncová answered that Orango and Anti-Formalist Rayok, directed by Sláva Daubnerová, with musical director/conductor Jan Kučera, set and costumes by Marija Havran, is visited in Prague’s New Stage by both traditional opera  viewers and totally new audiences. “For many visitors, the evening with Shostakovich is the very first meeting with operatic genre, and the fine balance of libretto, music and scenic perception sets absolutely different aesthetic criteria than the traditional opera repertory,” the theatre director said. “Audiences here, in the New Stage, have fits of laughter – often it is laughter mixed with tears, which is the result of many absurd situations presented onstage – situations so familiar from our recent past, or even current times.”

As for the second work, Janáček’s opera, she assessed it as one of the best on the Prague repertory; a staging in which the brilliant music of Janáček, as rehearsed and conducted by Robert Jindra, met to a maximum extent with the aesthetic view of one of the most inspiring contemporary Czech directors, Daniel Špinar, and with minutely elaborated and sophisticated stage design of Lucia Škandíková and costumes by  Iva Němcová, and, of course, with unchallenged performance of Slovak tenor Štefan Margita “whom the whole world envies”, Hroncová noted. “If you believe a bit in the ability to grasp and express such a fragile force as desire, if you want to open your heart to an elusive moment on the edge between hopelessness and redemption, do not miss out on this exceptional experience in Bratislava”, the director of National Theatre Prague summed up.

Other opera performances at the Eurokontext include Epic of Gilgamesh / Dido and Aeneas of the Brno National Theatre Opera (a three-part Oratorio, performed in English and a three act Opera featuring a prologue, performed in English); Fiery Angel by Moravian-Silesian (Moravskosliezska) National Theatre Opera in Ostrava; and the Harlequin Restor’d! by Cologne Baroque Ensemble, accompanied by art of mime. The performance of Graz opera was postponed to October, next season. The offer will be completed by local productions – Romeo and Juliet, The Makropulos Affair, Cosi Fan Tutte, Fidelio and recently premiered Simon Boccanegra. State Theatre Košice will also bring its recent opening, Mozart and Salieri/God’s Love: two one-act operas combining a chamber romantic opera by Rimsky-Korsakov and a modern piece by contemporary Slovak composer, Marián Lejava.

The dance performances to be presented are Anna Karenina by legendary Eifman Ballet; Birdie by Hungarian-French ensemble Companie Pál Frenák; and Antonio Gades Company’s Blood Wedding/Suite Flamenco. Eifman Ballet has been returning to the enthused Slovak audiences, and on one of his previous visits, when Boris Eifman arrived personally to Bratislava, he said that his ballet reflects the complexity of the whole world through the story of a single person; while concentrating on emotions and their expression via body movement. Eifman added that what makes his St Petersburg-based ensemble well-accepted at home but also around the world is the combination of old traditions of Russian ballet and the effort to show the issues of the current world, as well as universal human dilemmas and worries. This is true also about the staple piece of their repertory, the ballet Anna Karenina which shows the globally famous classical tragedy in a unique way.