The worst hospital is in Bratislava

On the other hand, patients from eastern Slovakia are the most satisfied with their treatment. 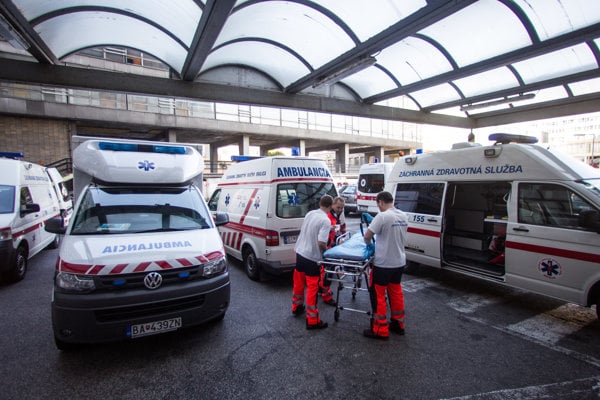 The evaluation of Slovak hospitals by clients of the private health insurer Dôvera slightly improved last year, when it rose from 1.72 in 2014 to 1.66 in 2015 (on the scale where 1 is the best and 5 is the worst). The survey showed that the most satisfied are patients hospitalised in eastern Slovakia, the TASR newswire reported.

The results for the past five years have been very similar, according to Martin Kultan, head of Dôvera.

“Sometimes it is better, sometimes worse, but Slovak patients are more or less equally satisfied with health care, though we would welcome a slight increase,” Kultan said, as quoted by TASR.

The regional differences are not big. The best situation is in Prešov Region, while the most dissatisfied were patients in Trenčín and Nitra Regions.

As for the specific facilities, the best evaluation in category of teaching hospitals went to the Central Military Hospital SNP in Ružomberok (Žilina Region), while in the group of general hospitals the St Michael Hospital in Bratislava scored the best. The best among specialised health facilities last year was Kardiocentrum Nitra, while in the category of other health facilities the best scores were received by the Institute of Nuclear and Molecular Medicine.

Unlike Dôvera, VšZP did not divide the facilities into specific categories, TASR wrote.

It also suggests that younger clients are more critical of their hospitalisation. Similarly to the previous ranking, the worst grades were granted by patients aged 18-37. Moreover, women are more critical than men, the survey confirmed, as reported by TASR.

The reason why the University Hospital Bratislava appeared among the worst facilities is the lack of finances, said its spokesperson Zuzana Eliášová.

“We have been pointing to the fact that the hospital does not have finances to improve the environment and quality of some so-called hotel services for long,” she said, as quoted by the Hospodárske Noviny daily.

The patients often notice in what state the chamber they are hospitalised in is. The clean environment and modern equipment are some of the conditions for patient satisfaction, said INEKO think tank analyst Dušan Zachar.

“If a hospital generates losses, there is no money left for reconstruction,” Zachar told Hospodárske Noviny.