Blog: Hope exists. We would be all dead without hope

Secret confession of a doctor who was not silenced even by bombings and continues to save lives with mobile clinic. 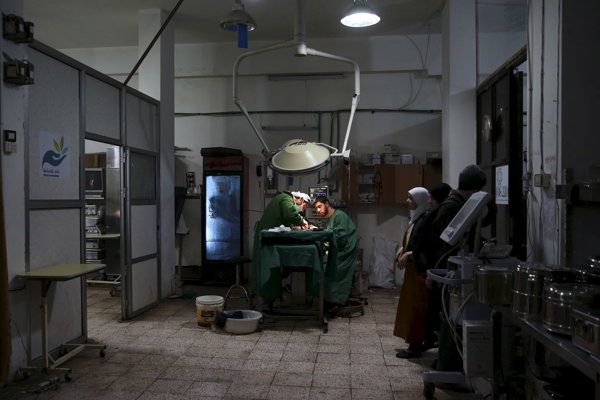 Amid is a doctor who was born and raised in Syria. The country and its inhabitants are his home and family. He as a doctor has always wanted to take care of his beloved ones. He does it even now at the time of brutal war. Amid is not his real name. It is to hide his proper name so his life and the mobile clinic he works at would not be threatened. Hospitals today lack medical supplies, without anestesia, people are treated literally by bare hands.

"Children’s limbs are amputated because medical centers lack the necessary equipment to treat such injuries. Patients are put into unconsciousness by hitting with a metal bar because there are no anesthetists available. In case anesthetists are in hand, it is served by unprofessionals. Parents come to the hospital and attach their children to intravenous infusion by themselves because there is no medical or paramedical staff.“

Mobile clinics are in fact the only "operating“ facilities which provide medical care in centre of conflict.

"As a result of hospitals and medical facilities being a constant target of opposition forces, Syrian doctors created hidden field hospitals or makeshift medical centers which aren’t easily identifiable in order to help the people. These hidden field hospitals became the major source of health care in areas controlled by opposition forces. With the amenity and the support provided by humanitarian organizations these hospitals gradually increased the capacity to provide medical care, which try to replace conventional hospital services. Some of these hospitals were established in basements to protect civilians and workers from the airstrikes.“

In the most affected areas even emerged such secret underground system of healthcare.

"By using sandbags we created temporary emergency rooms,“ explains Amid.

Unlike static facilities, the mobile medical units have proven to be less risky and much more effective in reaching the displaced population. However, even in mobile clinics the conditions under which doctor works are not easy.

"We do surgeries while there are bombs falling in neighbouring districts. They fall even on that facility.“

According to valid Geneve Convention must be the facilities providing medical care or gather wounded and civilians excluded from military operations. In this brutal war in Syria it does not apply. Contrarily, hospitals are target of attacks. The bombings are even doubled. After the first wave of bombing, everybody thinks the danger is gone. Consequently the second wave comes and is even more destructive.

"Targeted attacks on healthcare intensified the crisis in country and caused that the number of medical and health staff had to leave. This way belligerents cut the access of healthcare for civilians at the time when needed the most – in the middle of brutal war. The healthcare is being systematically destroyed and collapses overnight… or better said it has been completely destroyed for a longer time,“ says Amid.

We will never forget the horrors

We ask Amid if he could tell us one story of patient that touched him the most. He cannot recall on one particular. Not because he would not remember, but because there are too many. He cannot pick one.

"All the poeple who have died due to lack of medicine, all the amputations... There were times we were able to provide quality medical care, but now it's brutal. When you see women and children screaming and dying, it has a tremendous impact. Every Syrian is mentally destroyed by this war. Seeing children dying, lonely and being shot, when their Mom cannot help them. Inexplicable torture of children and civilians. Children are tortured by cutting their fingers off to the point they bleed to death. They tell to women to leave the bodies of their beloved ones for dogs. Babies bleed to death very quickly. We know in the first 30 minutes, if we can save them. They aim at pregnant women and try to shoot them in the bellies. The system is destroyed, but we have to keep on.“

Is it possible to work as a doctor after such experience?

"Many doctors and health workers are exhausted and burnout. Many of them think of leaving. They think over their carrer of not being doctors or health professionals anymore. Talking to victims of the attacks is mentally challenging - especially when they lose limbs and lives. When we cannot save human life, especially when under normal consditions we could ... it's very difficult. But yes, there is a hope. We would be dead without hope. We should never stop believing in hope, for all those people who stayed inside Syria.“