Tricklandia, a project in Starý Smokovec in the High Tatras, combines an amusement park with a family-type art gallery. 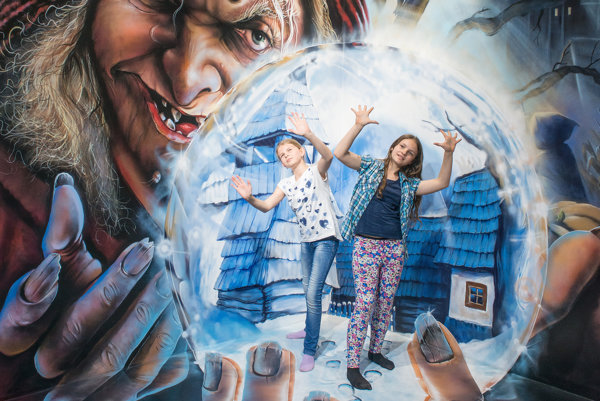 The aim is based on Trick-art – the art of optical illusions, the organisers said in a press release. The amusement park includes themes from Slovak folk fairy tales, and myths and facts from villages and castles (e.g. Vlkolínec, Dunajec, Bojnice Castle). Each exhibit offers some Slovak symbols, themes, and leitmotifs. A labyrinth of mirrors also forms part of Tricklandia.

The idea comes from two Slovak enthusiasts, Marián Bizub and Marián Aštáry, who cooperated with artists from around the whole country. The authors want to present the cultural and artistic wealth of Slovakia as a European fairy tale, Bizub said. Mascots called Trikoňs will guide children along their fairy tale route.

Tricklandia lies on a site of 500 m2 and consists of 24 rooms, with 15 trick-art pictures, a 6-metre tall book, and a number of exhibits for which 6 cubic metres of wood and 9,600 bolts were used. Almost 2,000 cans of spray paint were also used. The mirrors in the Mirror Kingdom cover an area of more than 200m2. Graffiti was used as well as other visual arts.

After a year of works, Tricklandia opened on May 18, with the first day open to the public being May 20. It will be open on weekdays, between 10:00 and 18:00. More information can be found at www.tricklandia.sk.